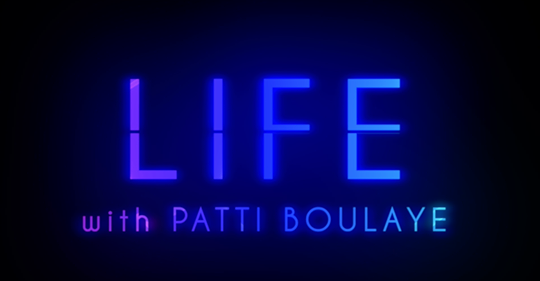 With Mental Health awareness a hot topic in the media currently, Patti Boulaye OBE, has made it her mission to get behind the celebrity scene and break down those stigma barriers.

Patti has recently finished recording her new show Life with Patti Boule at Disruptive Live‘s studios in London. A show which takes a good look behind the scenes of celebrities. Celebrities are invited to come on the show and share their real life stories, successes, failures and to humanise the celebrity roles they hold.

Through the glitz, glamour, posh hotels and limos lay normal people, humans, just like you and I with feelings, families and the same worries that we all have. This show is a way to reach out and remind us all the celebrity name tag doesn’t also come with a ‘I’m invincible’ tag too. Everyone has their ups and downs in life and as key role models for the younger community, celebrities can feel immense pressure to ‘get it right’ so as not to affect their followers.

Guests on the show have ranged from royalty to film producers and everyone in between. The show will be aired Friday 5th October 1pm on Disruptive.Live

Patti Says ‘This show comes from my concern about the alarming state of the mental health and suicide rate among our young people – lets tackle it together, now!”.

Award winning singer Patti Boulaye OBE continues to have a distinguished career spanning four decades – and she’s made a lot of friends along the way. In this exclusive series, Patti Boulaye will look at the other side of success from people from all walks of life, who have lived and breathed it.

This series is both inspirational and a cautionary tale for those looking for success. Interviewing the people Patti has met along the road – they will reveal the highs (and lows) of a successful career and lifestyle.

What are the Brexit Costs (and Benefits) to Digital and Technology...

Embracing an optimistic global IT channel through collaboration