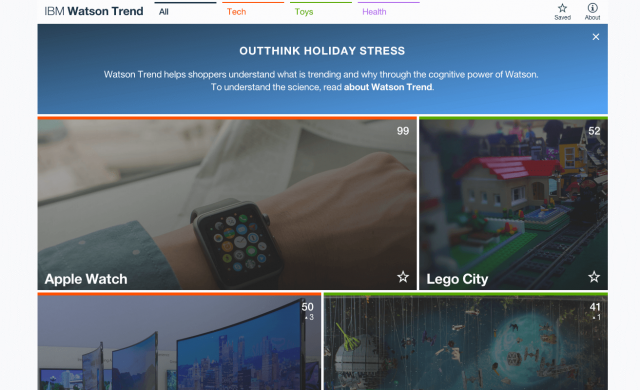 IBM today launched the IBM Watson Trend App, a new way for shoppers to understand the reasons behind the top trends of the holiday season and also predict the hottest products before they sell out. The app is available via a free download at the Apple App Store.

The IBM Watson Trend app distills the sentiment of tens of millions of online conversations by scouring 10,000 sources across social media sites, blogs, forums, comments, ratings and reviews. Unlike other apps or lists that provide a static ranking of “hot” products, the Watson app reveals how consumers feel about the products they are considering or have purchased.

Using Watson’s understanding of natural language and machine learning technologies, the app uncovers consumer preferences to pinpoint patterns and trends to reveal why people are choosing certain products or brands. The app also uses predictive analytics to forecast if a particular trend is a fleeting fad or will continue to remain strong.

To uncover insights behind the top holiday trends and products, Watson’s natural language engine aggregates insights into distinct trend groups: content, context and sentiment. Each group is given a relative daily Trend Score, ranging from 0 to 100, based on the impact (size of the conversation) and the momentum (the rate of growth of the conversation).

Users can view the top 100 trending products and stories behind them across three categories – consumer electronics, toys and health and fitness. As of November 18, the top trends include:

As consumers use the IBM Watson Trend app to pinpoint what products are popular and why, IBM also reports on how consumers will shop for these gifts. With the Thanksgiving holiday just one week away, IBM predicts that, for the first time, more consumers will turn to their mobile devices than their desktop to seek out the best buys.  Over the five-day holiday period, mobile traffic is expected to increase by nearly 57 percent, up 17 percent over 2014.  Mobile sales are predicted to increase by more than 36 percent, up 34 percent over last year.

The Watson Trend App uses a combination of API capabilities from IBM’s open Watson Developer platform including Sentiment Analysis, Keyword Extraction, Concept Tagging and Taxonomy Classification. In the future, IBM Watson Trend will continue to evolve with the addition of new capabilities including geographic and language data, and an increased level of personalization that caters to each consumer’s unique interests and preferences.

IBM continues to add and stretch the boundaries of what Watson can do. The original Watson system was based on 1 natural language QA API, today the platform has over 30 APIs powered by over 50 underlying technologies to provide capabilities that span language, speech, vision, and data insights.

By sharing these capabilities via the Watson Developer Cloud, an open developer environment, a vibrant community of entrepreneurs, startups and established businesses are commercializing their own cognitive powered products and services to transform a variety of industries and disciplines including retail and customer service.

For more information or to download the IBM Watson Trend App, go to www.ibmwatsontrend.com

Smart Cities Are Going To Be Ungodly Hot, Unless We Do...

The problem with Blockchain

#TransformCIO Episode 3 – Interview with the Arcadia Infrastructure and Services...

IBM is making it easier to develop software in the Cloud...