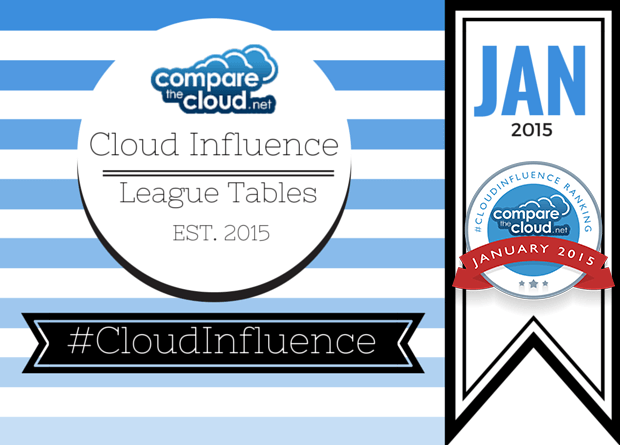 As far as the UK contingent go, the top ten is headed by Simon Porter from IBM, who is not only a regular blog contributor to Compare the Cloud, but must also be one of the most prolific executives on social media, having posted over 100,000 tweets. In 8th, nestled among the various CEOs listed, is Francis Maude, Minister for the Cabinet Office and Paymaster General meaning that his boss David Cameron, the Prime Minister, fell outside the top ten in 11th.

January’s rising stars – people that came out of nowhere, having not really had much of a presence previously – included Roberto Medrano, Peter De Santis and Robert Faletra, all of whom featured prominently in the Global 50 #CloudInfluence Individuals.

It also includes Canadian Industry Minister James Moore who claimed that Canadian geography was a real challenge for extending universal broadband access. He suggested that the U.S. target wouldn’t be realistic or affordable for Canada, given their population density.January’s rising stars – people that came out of nowhere, having not really had much of a presence previously – included Roberto Medrano, Peter De Santis and Robert Faletra, all of whom featured prominently in the Global 50 #CloudInfluence Individuals.

Tom Szkutak, Amazon’s CFO, rose to prominence following excitement in the media that Amazon would be breaking out its Web Services revenue in future.

Dr Chandra Sekhar, founder and CEO of TheRightDoctors.com, gained publicity for receiving $100,000 credit for Google’s cloud services and 24/7 gold support earlier this month as a part of the Google launchpad to be held in February. As did Shreekant Pawar, co-founder of Diabeto, a hardware device targeted at diabetics to store and monitor blood sugar levels on smartphone from a glucometer directly, as they received $40,000 from the same fund.