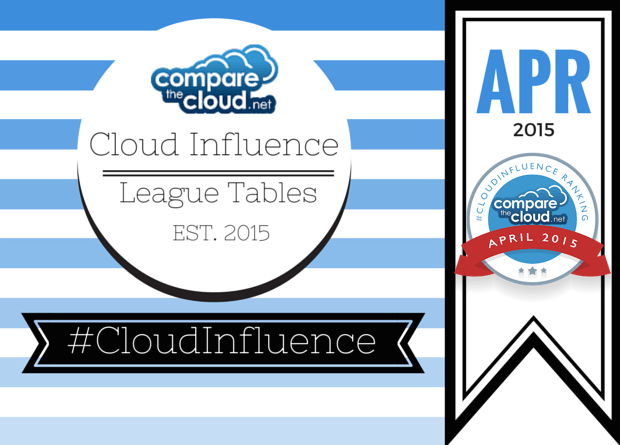 This month’s cloud bursters is unusual in consisting mainly of CEOs. Top of the list is Amazon’s CEO Jeff Bezos. With all the excitement and comment following the disclosure of the financials for Amazon’s cloud business AWS, Jeff topped the Global 50 this month.

Next on the list is Daniel Ives, an analyst at FBR Capital Markets, who appears in the #CloudInfluence ranking sporadically, commenting each time the main tech firms issue quarterly results. He is followed by Scott Guthrie, EVP for Microsoft’s cloud and enterprise group, commenting on their claimed leadership in cloud.

Next up is Oracle CEO, Mark Hurd. Interestingly enough, neither the firm where Mark now works, Oracle, nor the firm where he came from, HP, feature very highly in our #CloudInfluence rankings. Like many legacy tech vendors they are focusing on private cloud because it’s not all that different from their existing operating model. The challenge for them is that many clients are voting with their workloads, as is evident in the recent results from the public cloud providers like AWS and Microsoft. It remains to be seen how quickly the traditional vendors will change, because its impossible to simply change your operating model and culture overnight. It is interesting therefore to see which of these vendors appear regularly in our #CloudInfluence rankings, as IBM does – showing that they appear to be making this transition. And which of these vendors don’t appear as regularly in our #CloudInfluence rankings, like Oracle and HP – suggesting that they need to do more.

Luis Benavides, Founder and CEO of Day1 Solutions, rose to prominence this month commenting on their partnership with Cloudian and appointing a new VP of Engineering and Solutions. He is followed by a series of other CEOs with recent announcements along with Vibhor Kapoor another Microsoft Azure executive.

As ever topping our UK list is the prolific Simon Porter, IBM’s European Midmarket VP. While he dropped from 41 to 44 in the Global 50 #CloudInfluence Individuals this month, he was still the top IBMer, ahead of his CEO Ginni Rommetty in 47th.

Second this month was Ian Masters from Vision Solutions who was quoted widely in relation to the launch of the firm’s Double-Take Cloud Migration Center product which provides automated migration for servers and applications into the cloud from private and public cloud platforms.

Research reports were also widely in evidence this month. Ian van Reenen in 3rd was commenting on the results of an Autotask survey of Managed services providers (MSPs) which found that they are more focused than ever on managing endpoints and using remote monitoring and management (RMM) solutions to increase visibility and scale to meet the ongoing demands of managing cloud-based solutions. Meanwhile David Blumenthal, MD, of the Commonwealth Fund in 9th was commenting on a report that theft, illegal hacking, and other breaches of protected health information have compromised 29 million medical records in 949 incidents between 2010 and 2013, spelling out a crying need for better data security.

The health of the industry is demonstrated by the change month on month in our rankings for individuals – not only the Global 50 #CloudInfluence Individuals, but also the cloud bursters and UK #CloudInfluence Individuals. Aside from a few prolific regulars, such as IBM’s Simon Porter, most of the names are new each month as different companies launch new products, services or reports.

Easynet Global Services, Daring to be Different in Cloud

How to make IoT real with Tech Data and IBM Part...