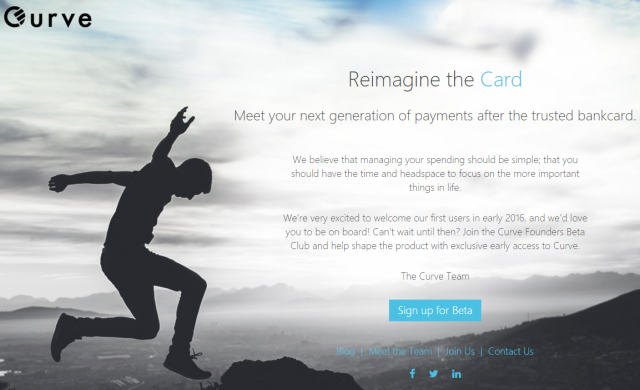 Today, Curve launches to simplify payments and reshape people’s experience of managing their money. The London-based startup allows people to combine an unlimited number of bank cards into one physical payment card, accepted everywhere MasterCard cards work. It is supported by a mobile app that gives people a clearer picture of their payments. This includes services such as the ability to see all transactions in one place – in real-time, access to super low foreign currency rates with no fees, and using Amex at places it isn’t accepted. Curve offers the advantages of products such as Apple Pay, but in the widely accepted form of a card and without the £30 transaction limit.

Curve is built on the MasterCard Network and works the same way as every other card, supporting the latest Chip and Pin, magstripe and Contactless technology. Curve is a Prepaid MasterCard, so has bank-level protection and all the security features of traditional cards.

‘With Curve you have one card and see every single transaction in one screen. We’re not another new bank or extra service to deal with, we transform your existing fragmented financial world into somewhere crystal clear, designed for the user,” says Shachar Bialick, CEO and co-founder of Curve. “Mobile payments have the potential to bring similar benefits, but cards work everywhere and people are used to them. So we’ve created the best of both worlds – all the benefits of mobile payments via a ground-breaking card.”

“The concept of payments as we know it is on the brink of being shaken up in a meaningful way,” says Taavet Hinrikus, CEO and co-founder of Transferwise and investor in Curve. “Today, Curve makes the first step at being the company to finally make this significant change in impacting how people pay for goods and services.”

“At MasterCard we are at the forefront of supporting pioneering payment solutions that improve people’s day to day lives,” says Eimear Creaven, Group Head of Growth Markets. “Using our network, Curve is bringing to market genuine innovation in payments and helping customers to manage their financial lives better.”

The Curve card looks and works just like one of your standard bank cards with Chip and Pin, magstripe and Contactless technologies, and doesn’t require a battery. You set a default card in the app and can change it to another card before payment in the app with one swipe.

The Curve app displays every transaction made, with a running total across each month. Manage and understand your spending on the go, by labeling transactions with a swipe of your finger.

The Curve team offers 24-hour customer support, and protection against lost or stolen cards. The Curve card has an initial one-time cost of £35 which includes shipping and payable only when the card is sent out. The card and app are free to use.

Curve protects financial information with industry-leading security and fraud prevention systems. With Curve your original card details and data are never revealed to the merchant. Instead, when making a purchase with Curve, online or in-store, a unique token is used to process your payment, keeping identity and actual card numbers safe. These added layers of security protect against fraud and remove the worry that often comes when a bank card is lost as the original cards are safely at home.

Initially available on iOS, Curve soft launches today in the UK to a limited number of users in the business community – including businesses, entrepreneurs and freelancers. It will roll out to consumers in the coming months. People can sign up and order by downloading the app, or at www.imaginecurve.com

Why Dell EMC for SAP? Here’s Why.