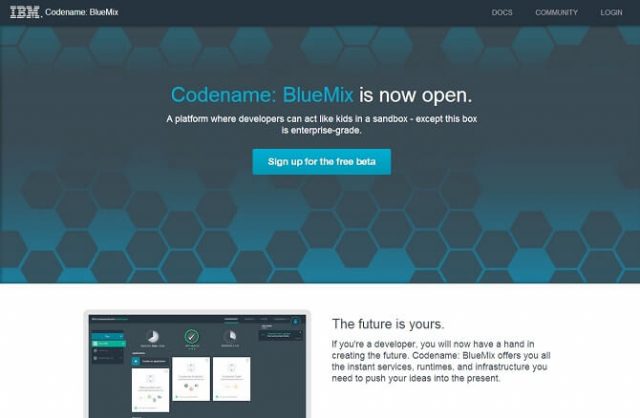 More than 30 Services, including Data and Analytics-as-a-Service for Real-Time Insights, New BlueMix Garages for Developers

With this news, IBM aims to accelerate the pace at which cloud computing will transform global industries.

Built on open standards and leveraging Cloud Foundry, BlueMix has made major advancements since being announced in February, including:

IBM is leveraging BlueMix’s foundation on SoftLayer for this expansion, combining the strength of IBM’s middleware software with third-party and open technologies to create an integrated development experience in the cloud. Using an open cloud environment, BlueMix helps both born-on-the-web and enterprise developers build applications with their choice of tools. With the ability to easily combine a variety of services and APIs from across the industry to compose, test and scale custom applications, developers will be able to cut deployment time from months to minutes.

“The adoption rate of BlueMix has been nothing short of phenomenal since being announced only a few short weeks ago,” said Steve Robinson, General Manager of IBM Cloud Platform Services. “Rapidly growing numbers of beta participants are embracing our model of extending their existing assets and services into a cloud-based, open-source development platform, allowing our clients to bridge between the tools they are planning for the future and the workloads and services they use today to get them to market faster.”

In the first eight weeks of BlueMix’s open beta launch, IBM has seen rapid adoption of the open platform with key clients and partners such as GameStop, Pitney Bowes, Continental Automotive and start-ups including EyeQ.

“BlueMix has helped us grow and scale our resources at a rapid pace, assisting us in deploying a cost-effective solution to our clients that helps us get to market faster,” said Michael Garel, CEO and Founder of EyeQ. “With BlueMix, we are able to reduce the amount of time spent on monthly server maintenance by 85 percent, and turn our attentions back to greater innovation.”

Cloud Integration services to securely connect and integrate an organization’s applications and information in the cloud. Developers can use pre-defined Kristen M. (Kristen Dattoli) Dattoli connectors for accelerated integration, or develop custom APIs as needed to easily and securely tie back into systems of record behind their firewall. Integrated API management capabilities provide an easy mechanism to publish self-service APIs, that can be shared with the broader API economy. This allows developers to mix cloud-based PaaS, third party cloud applications, and on-premises systems behind security gateways, moving between cloud and on-premises systems in a hybrid, integrated environment.

Internet of Things services allowing developers to register and connect networked devices such as microprocessors and embedded machine to machine sensors to the cloud, easily aggregating and reacting to data and events in real time. Organizations can build applications which efficiently manage, analyze, visualize, and interact with the massive quantities of temporal and spatial data generated by vehicles, wearables, mobile phones, cameras, computers, sensors and other intelligent devices.

DevOps services enabling developers, IT departments and business teams with an open, integrated rapid development environment that scales from individual developers to enterprise teams. The DevOps Continuous Integration service will provide end-to-end “build” capabilities to speed changes through the development process, DevOps Mobile Quality Assurance (MQA) will help analyze user sentiment to spot problems before they go viral, and the Monitoring and Analytics service will identify application problems during development – leveraging analytics to help applications achieve availability and performance goals. In addition, DevOps will include a new RapidApp service that requires no coding,using visual tools to expand the scope of web and business applications developers can create.

IBM also announced the launch of BlueMix Garages – physical, collaborative spaces for developers, product managers and designers to collaborate with IBM experts to rapidly innovate and deliver new cloud applications to be deployed onto BlueMix. The first IBM BlueMix Garage will be located in San Francisco’s South of Market neighborhood – home to more startups per square foot than anywhere in the world. The Garage will sit in Galvanize, a startup hub which will provide a shared home to approximately 200 San Francisco startups by the end of 2014. Working side-by-side with IBM consultants, partners and entrepreneurs, Garage users will transform application development with modern cloud technologies and highly disciplined agile processes.

Underpinned by a strong ecosystem, IBM aims to accelerate the pace at which cloud computing will transform global industries. Currently, IBM’s education, mentoring and innovation initiatives reach more than four million software developers worldwide, and more than 1000 startups across retail, healthcare, finance, agriculture, automotive and more. The continued growth of the BlueMix community, as well as launches of additional BlueMix Garages, will help provide this network with the skills, innovation and tools needed to leverage the power of cloud to revolutionize the use of mobile, big data and more.

IBM is the global leader in cloud with an unmatched portfolio of open cloud solutions that help clients to think, build or tap into it. No other company has the ability to bring together unique industry knowledge and unmatched cloud capabilities, that have already helped more than 30,000 clients around the world with 40,000 industry experts. Today, IBM has 110 cloud SaaS solutions, thousands of experts with deep industry knowledge helping clients transform and a network of 40 data centers worldwide.

For more information about cloud offerings from IBM, visit http://www.ibm.com/cloud.

Unless stated otherwise above:

Legacy, Migrations and the Elephant in the Room!