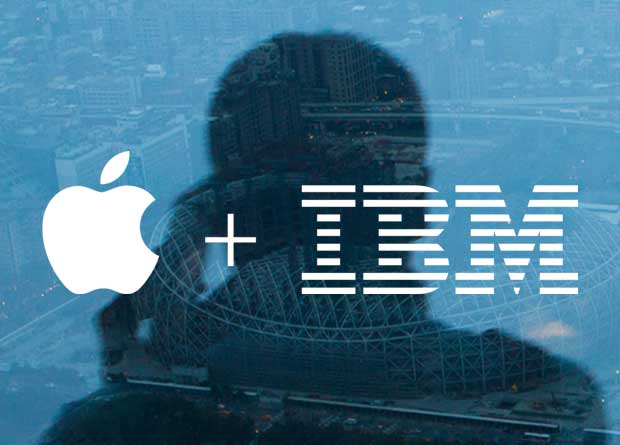 Microsoft has quite comfortably ruled the office for sometime. Even with great, cloud-based advances from Google and near misses from Apple, (iWork anyone?) capturing the daily business and enterprise market has not been easy.

Microsoft has looked increasingly weak in other areas. Where PCs and Windows laptops reigned supreme now iPads are showing up in boardroom presentations, on trains, airplanes and even the coffee shop. The success of the iPad, arguably the catalyst for our increasingly mobile appetitive, has given the outsiders a second shot at the crown. The shot in this title bout might come from the iPad, or iPhone, in your hand but the software is all IBM.

Back in April, following a study that found 90% of global organisations surveyed were planning to increase their investment in mobile, IBM announced the expansion of its IBM MobileFirst portfolio. In July Apple and IBM announced a business partnership to develop business-centric apps together. And this week they have released the first salvo in the enterprise battle – IBM MobileFirst for iOS.

Billed as “A Suite of Solutions Built for Transformation” IBM MobileFirst for iOS is an end-to-end set of apps have been developed to address security, cloud, integration, and app management and support. These apps aim to combine the power of enterprise data and analytics with an elegant user experience. Who would have ever guessed the killer enterprise app(s) the iPad had been missing was going to come IBM?

“What we’re delivering aims directly at the new quest of business—smart technologies that unlock new value at the intersection of big data and individual engagement,” said Bridget van Kralingen, Senior Vice President for IBM Global Business Services. “Our collaboration combines IBM’s industry expertise and unmatched position in enterprise computing, with Apple’s legendary user experience and excellence in product design to lift the performance of a new generation of business professionals.”

“This is a big step for iPhone and iPad in the enterprise, and we can’t wait to see the exciting new ways organisations will put iOS devices to work,” said Philip Schiller, Apple’s Senior Vice President of Worldwide Marketing. “The business world has gone mobile, and Apple and IBM are bringing together the world’s best technology with the smartest data and analytics to help businesses redefine how work gets done.”

Initially the apps will be focused on the finance, air-travel, and banking industries. Some of the big names supporting IBM MobileFirst for iOS include banking giant Citi, Air Canada and US telecoms provider Sprint.

The IBM MobileFirst website, which is well worth a look, says the apps are “designed so enterprise systems work for people, not the other way around.” It is about time too. For many of us Microsoft dominance has often meant tools ugly enough to get the job done.

The market needs challengers. Without competition there is no innovation, no new thinking. IBM MobileFirst for iOS might just be the opposition that not only takes on Microsoft but also helps enterprise become genuinely mobile.

Looking After the Pennies: Remote Accounting Likely to Fail Without Cloud...

Cloud vs. Dedicated Hosting: What is Best for your Business?