Many pundits have offered their reflections on the evolution of the cloud market in 2015, but few if any have had a year’s worth of data on which to base their finding. Our #CloudInfluence data gives a day by day rating throughout the year for every major global player – a veritable goldmine.

Over the year Microsoft and Amazon have vied for leadership in the Compare the Cloud #CloudInfluence rankings with Microsoft’s sizeable marketing machine prevailing over Amazon’s more lean marketing operation. Behind these two Google, IBM and Oracle have vied for third place without any of them being able to establish a clear advantage over the others.

The outlook for 2016 is largely similar. Amazon has established enough of a lead with AWS and growing at a speed that out-paces its rivals. If it is able to continue innovating with new services and investing to expand its estate (as it has done recently with the announcement of new facilities in the UK and Korea) then its market share lead should be assured. Likewise Microsoft Azure may trail AWS in public IaaS and Paas, but it has established a clear lead over the others. It has also been successful exploiting its .NET franchise to develop a compelling hybrid proposition, is rivalling Salesforce and others in SaaS and has become the preferred public cloud option for HP, Dell and others, putting it in a very strong position. 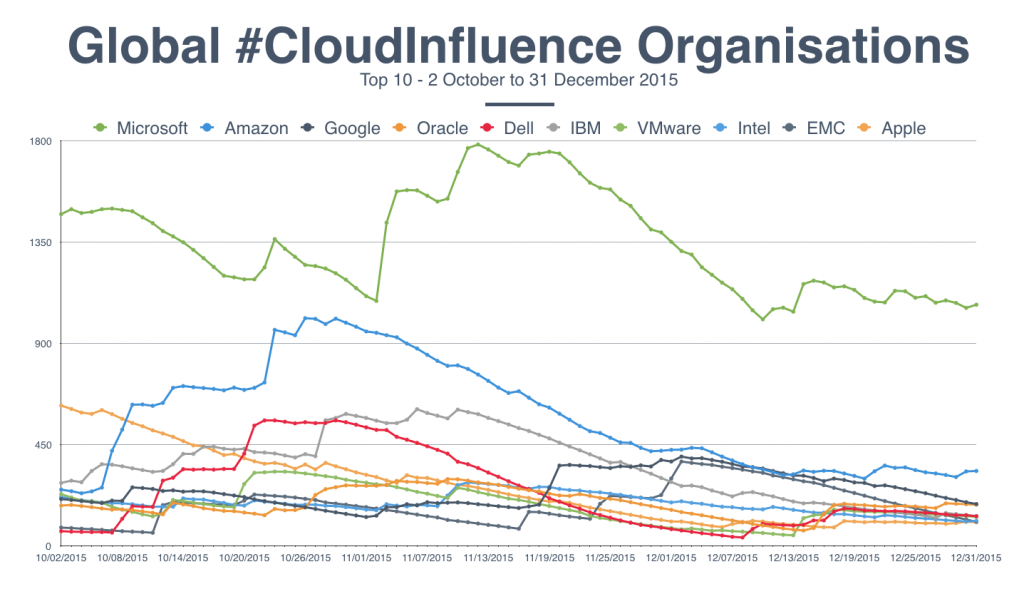 The latest report from Synergy Research Group says that public cloud services grew at 51 percent in 2015 as customers are increasingly flocking to AWS and Azure, while private and hybrid cloud growing at just 45 percent. This hides that fact that AWS and Azure have been growing far faster than the market as others have either struggled in public cloud or exited it entirely.

So what are the potential disrupting factors to shake up the market in 2016?

1) Interest rates; these are inevitably going to rise (albeit slowly). Participation in the top tier of the cloud market requires a phenomenal level of investment as rivals seek to compete with ever expanding data centre estates and facilities. While Amazon is seeking to grow organically, borrowing to invest and funding interest from on-going operations, many of its rivals have massive cash piles to deploy. In 2014 Steve Brazier at Canalys predicted that AWS could not be profitable and would be unable to keep pace with its cash-rich rivals. In 2015 when AWS disclosed that it was profitable, he revised his outlook to predict its demise when interest rates go up, as it would increase AWS’s costs in a way that in a way that its rivals, free from borrowing, could avoid. In reality only Microsoft, Apple and Oracle really have cash piles of any great size. IBM and others are in the same boat as AWS, needing to fund expansion from debt or revenue.

2) OpenStack: in theory OpenStack has such broad support, including from so many tech giants like IBM, HP, Intel and Dell, that it should prevail. However in reality innovation by committee is rarely successful and many of its backers are fighting harder to differentiate themselves within the OpenStack community than they are for the community itself. And just as OpenStack started to become enterprise-ready one of its main backers HP stumbled and quit public cloud before announcing that its new preference in public cloud was Azure rather than any OpenStack alternative. Containers may offer some salvation, but at the cost of making OpenStack itself less essential.

3) The Larry Factor: as we will be exploring in greater detail in a blog later this week, Larry Ellison has done a u-turn and committed Oracle’s future to the once derided cloud. One of the cash rich rivals that Brazier warned us about, Oracle is investing in the mother of all facilities in Austin, Texas. I’ve always been one to view Larry’s announcements with a level of scepticism and think that coming from behind to overtake AWS in public cloud might be to much of a challenge for even him. 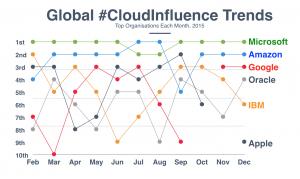 Of course we will be tracking #CloudInfluence day by day and reporting quarterly to keep you abreast of how 2016 unfolds. And you’ll be able to see how these factors and our predictions fare. #CloudInfluence is of course an indicator of the share of voice and influence each player has, but given the very close correlation with the respective success of each player, it provides us with an insightful barometer on the cloud market as it evolves to become the dominant mainstream IT segment.

Oh to live in interesting times!

Partnerships, Alliances in the Cloud, And What Makes Them Effective

Learning to love the IT team: how ALM automation can help...