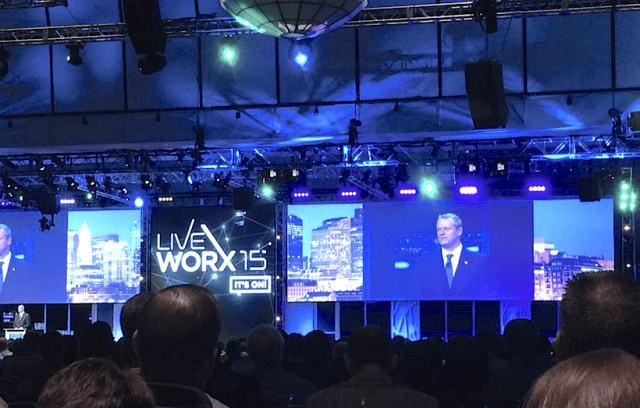 PTC’s annual IoT event LiveWorx was a hit in Boston last week, May 4-7 2015, with PTC customers, prospects and third party developers all excited by the future of IoT. PTC CEO Jim Heppelmann and his team saw a turnout of an estimated 2000 attendees, up from around 250 or so in 2014.

Concerns on whether standards and security technologies can keep pace with the rapid pace of evolution and adoption of IoT did nothing to dampen the enthusiasm of the crowd.

The reality of the IoT is that it isn’t a new market, and adoption is much more rapid than people have expected, it has been accelerated in recent times by new technologies. And PTC is determined to be at the leading edge of that acceleration.

IoT is more than just smart, connected products. It requires middleware and infrastructure to make the detached connected; allowing companies to turn the petabytes of dark data and information captured by sensor laden products into valuable insights and innovative services.

PTC’s acquisitions of Thingworx and Axeda and (May’s intent to buy) Coldlight have moved them beyond their traditional walls of (CAD, PLM, ALM and SLM) product to position them well in the rapidly evolving IoT world. PTC is moving into integration services, software infrastructures, connectivity, analytics and insights.

PTC is making these moves to take an early lead in what is expected to be amongst the most rapidly evolving technologies of the next few years.

Reinforcement (if this was needed) of their IoT strategy came in the form of a partnering agreement with servicemax, the field service specialist.  This centres on a new generation of (IoT) connected service products from servicemax that will deliver, amongst other things, predictive maintenance and upgrade advisory services to their customers.

PTC’s existing (CAD/PLM/ALM/SLM) businesses may have taken somewhat of a back seat at LiveWorx but they’re not forgotten. Their CAD business is heading for IoTisation too. ThingWorx Converge is intended to deliver product development to IoT integration (of sorts). Converge is, in fact, an add-on that delivers more standardised 3rd party/ISV software to IoT connectivity.

Having seen a demo (keep it simple PTC!), I get it. But the concept of hub and spoke integration isn’t new, and yet another integration platform may be one to many. In its current form I’m a tad confused as to why it isn’t simply a new set of features offered as part of standard ThingWorx? Wouldn’t that create pull from the ISV developer community PTC?

Of course PTC’s recent expansion into domains anew will not be without its challenges. For one they need to integrate their existing business lines with new acquisitions into something more cohesive than a disconnected collection of software toolsets. Converge will allow this to happen … to an extent. They also need to continue to deliver revenue and profit from existing business lines to fund their investments in IoT. According to PTC, this is also in hand (and hopefully to plan?).

All in all, LiveWorx was a good event. From 250 attendees last year to around 2000 this, on that kind of growth trend should we be expecting 20,000 next year PTC?

Legal Issues To Consider When Moving To The Cloud

Cloud acronyms are a pain in the AaaS

Why CMOs Need to use Web Services to Stay Innovative