Concorde still remains a pinnacle of technological success thanks to its faster-than-sound flight speeds. The last flight of this wonder was just under 15 years ago, and since then there hasn’t been another aeroplane to come close to Concorde’s speeds. This could soon change thanks to a super-fast jet engine that doubles up a space-bound rocket, marking the UK’s investment to become a space nation. Introducing SABRE.

In 1942, a project by the UK’s Ministry of Aviation and Miles Aircraft began. The idea is to bring an aircraft to market with the ability to fly above Mach 1 – The Bell X-1. It achieved a speed of just under 1,000mph in 1947 by pilot Chuck Yeager.

Now, the current record at the time was under half of this, so this was quite a feat. It also spawned the X-planes; a series of experimental US aircraft used to test new aerodynamic concepts and evaluate new technologies.

On the 2nd March 1969, one of the most renowned aircraft of all time took to the skies for the first time – Anglo-French invention, Concorde. Built by British Airways and Air France, Concorde was the first supersonic passenger plane, and to this day remains only one of two. This craft was capable of reaching speeds of Mach 2.

You may have heard of the ramjet and the supersonic combustion ramjet (scramjet). These engines are capable of reaching Mach 6, thus breaching the hypersonic speed region.

Hypersonic – Speeds in excess of Mach 5

Due to the way these engines operate, they cannot be used from standstill, but must already be travelling at high speeds. Normally a (sc)ramjet would be dropped from a larger aircraft with engines firing after reaching its required speed.

Supersonic flight isn’t in mainstream operation, outside of military operations, and hasn’t been since 2003. Largely due to the tremendous technical challenges, and subsequent larger costs, this type of flight brings. The aerodynamically different design needs arise from the introduction of the “transonic regime” – where some parts of the plane face supersonic airflows, and other parts subsonic, simultaneously. Coupled with limited technological options and restraints like that of the (sc)ramjet, this technology needs some investment to fully flourish. 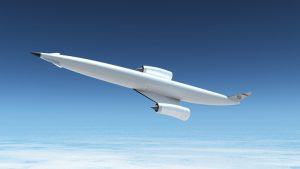 So, let’s get down to the tech itself. The Synergetic Air-Breathing Rocket Engine, SABRE, is set to be tested in 2020. Reaction Engines, the company behind the technology is a British firm from Oxfordshire and have so far raised over £26.5 million. The rocket can be used in two ways: an air-breather and as the rocket itself.

Current flight times from London, Gatwick to New York, USA take around 8 hours. With SABRE, the journey would be completed in 2 hours at Mach 5. Or 24 minutes at Mach 25.Click To Tweet

Whilst in air-breather mode, SABRE will operate in its commercial form, propelling the aircraft at speeds of up to Mach 5 (3,836 mph). An air-breathing jet engine draws hot gases expelled from the exhaust through a propulsive nozzle, which in turn creates thrust. Reaction Engines has developed technology that can cool air of up to 1,000 degrees Celsius to sub-zero temperatures within a fraction of a second. SABRE takes a slightly different approach in that it uses the hot helium that exits during the cooling process. The high-pressure air is then driven into the combustion chamber. Claimed to be “the most powerful means of cooling air in the world”, the heat exchanger can remove 400 MW of heat from the air, and only weigh as much as 1 tonne to do so. Not only will this benefit the aerospace industry, and be a catalyst for hypersonic means of travel, but other industries such as raw materials, motorsport and industrial processes could benefit too. 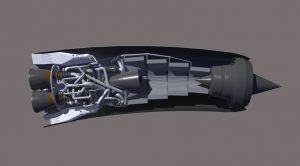 Looking at the rocket-mode, the engine uses onboard liquid oxygen to explode into speeds of Mach 25, or 19,180 mph. This might sound ludicrous, and quite frankly, that’s because it is. To achieve orbit, a space shuttle must reach speeds of around 18,000 mph during a typical NASA launch. That’s a machine, purposely built to go to space being beaten in speed by a machine that doubles as a commercial jetliner. If you were to fire a rifle, SABRE would out-accelerate the resulting bullet by 9 times. By implementing this technology in an aeroplane, as opposed to your traditional rocket, we would see space flights using horizontal take-offs and landings from space. Materials would be saved as the probability of them burning up on re-entry are lowered due to the option of a slower descent. A hybrid approach promises to save costs, which can then be re-invested and continually boost our galactic presence.

Several large companies are backing this technology. Rolls-Royce, known for their cars, but also their incredible jet engines have a vested interested. As do aerospace giants Boeing, specifically their investment-arm – HorizonX, and British Aerospace Engineering Systems (BAE). BAE paid Reaction Engines £20.6m back in 2015 for a 20% ownership in the company. Financial investment is coming from Baillie Gifford Asset Management and Woodford Investment Management, both investment management firms. Perhaps surprisingly, the UK government is investing too, contributing £60m to Reaction Engines. This comes as part of a move to secure 10 percent of the £400bn-a-year global space market to boost the economy, create high-skilled jobs, further science and research and more.

So, how does Mach 5 compare to other well-known speeds?

Current flight times from London, Gatwick to New York, USA take around 8 hours. With SABRE, the journey would be completed in 2 hours at Mach 5. It’d only be 24 minutes at Mach 25.

Tech of the Week #8: Facial Recognition – Caught in a crowd

Facial recognition has been in the news a few times lately, and here it is again. As reported by us a short while ago, Chinese and UK police have used special facial recognition technology that can pick someone out of a crowd. China has been building on their surveillance network further; now with 170 million CCTV cameras in operation and plans for 400 million more to be installed over the next 3 years. But it’s not all as bad as it sounds…

If you want to talk tech or aircraft, and for more great content, fly over to my Twitter @JoshuaOsborn16.

What is a blockchain? Building trust in bitcoin

Hybrid cloud 2017: A forecast for change

Finding your gurus: How tech recruitment has changed