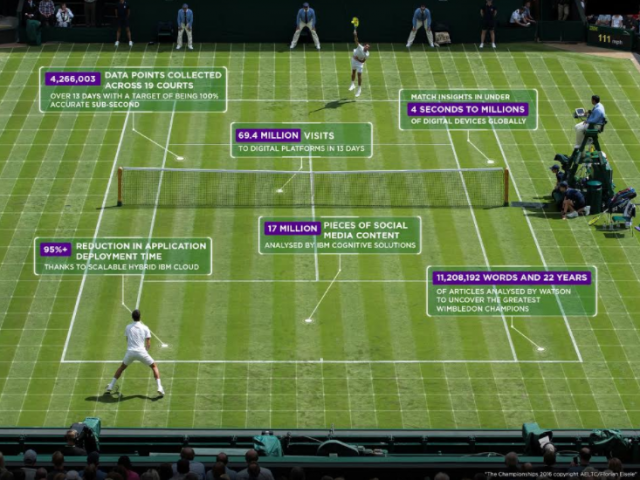 IBM (NYSE: IBM) and The All England Lawn Tennis Club (AELTC), today unveiled new technologies for The Championships 2017, marking the next phase in the AELTC’s journey, cementing digital as the gateway to their brand with unique data insights and cognitive solutions.

Sports and entertainment companies compete on compelling content, which is why personalising and re-shaping the fan experience is a top priority for telecom, media and entertainment companies. Wimbledon is embracing this change in their pursuit of being the best tennis tournament in the world. It starts with making sense of data and realigning around fans: understanding and delivering on their needs and preferences.

Changing fans’ perceptions – A new real-time insight powered by a bespoke solution from IBM, which seeks to highlight matches of particular interest and quality. By providing real-time insights and analysis around breaking match records faster than anyone else, IBM supports Wimbledon in being ‘first to market’ with content, helping Wimbledon rise above the noise of other global media outlets.

The use of a new competitive margin metric will help the Wimbledon editorial team to tell the stories of the matches in new ways as play unfolds. This will provide added insight to fans, with the aim of creating not just context, but a connection that will encourage them to delve deeper.

IBM SlamTracker with Cognitive Keys to the Match is a cross platform application that provides real-time scores, stats and insights for all matches in progress. The updated Keys to the Match will be more detailed, including insights such as pace-of-play, serve placement spread or baseline proximity. The solution also uses Watson APIs to refine and update the player style based on match data.

Wimbledon fans will have an unprecedented level of analysis, insight and engagement as the match unfolds, particularly with mobile devices in mind. Real-time data will be integrated from multiple sources including courtside statisticians, chair umpires, radar guns, ball position, player location and even Twitter for social sentiment.

At the beginning of a match, fans can launch IBM SlamTracker to check out players’ keys (ie what are the tactics to look out for on two particular players in a head to head match) and follow their progress against their keys in real time—point by point. The end result is a richer, more engaging experience before, during, and after each match.

IBM will produce additional insights based on “pressure situations” within a match (down 0-40 in a game, down 2 sets). These insights will show the historical performance for a player when in the specific situation, revealing hidden patterns in player and match dynamics to determine the pressure situations.

Leveraging AI to assist the Wimbledon visitor – In 2016, Wimbledon developed the award-winning “My Wimbledon Story” feature in the official apps. The apps have been enhanced this year with the new Watson-enabled bot, ‘Ask Fred.’

IBM Watson is revolutionising the guest experience at Wimbledon, offering a cognitive assistant to answer a variety of questions from fans visiting the event. The new mobile app will serve up information about dining options, features a natural language interface and the app also provides an interactive map of the venue. The new assistant is available to visitors to Wimbledon within the Official Apps for mobile and tablet.

New AI-powered automated video highlights for Wimbledon fans – Fans don’t just want to know what happened, they want to see it. The Wimbledon video production team is responsible for serving up all the best highlights from across the tournament for their own digital platforms.

New for 2017, AI-powered automated video highlights will be generated using IBM Watson and other video and audio technologies to bring to life the most exciting moments of The Championships from the six main Show Courts. With an average of three matches per court per day, video from the matches can quickly add up to hundreds of hours of footage which could take hours to pull together into highlight packages.

The AI system created by IBM Research scientists and IBM iX consultants will auto-curate highlights based on analysis of crowd noise, players’ movements and match data to help simplify the highlight video production process and focus on key moments in the match. This will allow the Wimbledon editorial team to scale and accelerate the video production process for highlight packages and expand the number of potential matches that are turned into timely highlight videos for fans to watch and share. A 360 camera view will also be provided from the practice courts to give fans a unique view of The Championships they have not seen before. All innovations have been designed to help Wimbledon deliver high value content in the moments that matter to connect with fans everywhere.

New for 2017 is ‘What Makes Great’, a solution powered by IBM’s data and cognitive capabilities. This provides fans with a new perspective on greatness from an analysis of 44 years of sports coverage. IBM will use its detailed historical data to identify key tennis performance measures against a set of topics that are collectively required to make a great champion. There is more to being great than simply looking into statistics. Attributes such as a great serve and return, to more emotive drivers such as passion and performing under pressure, helping a fan understand who is the greatest of all time and therefore enhance the fan experience.

IBM used its Cognitive solutions to conduct deep analysis of unstructured data such as:

Finding out what makes a champion is a hugely complex undertaking. By comparing quantitative and qualitative data as well as looking at Champions across all five draws, IBM has informed a timeless debate in an entirely new way, one that has not been possible – until now.

Wimbledon will use IBM’s cognitive and cloud platform to make its digital channels the most engaging place to experience The Championships and open the eyes of every sports fan to the beauty and craft of the players “in their pursuit of greatness”.

“We are excited for this year’s developments, yet again improving and developing our digital strategy for fans to make the most of their experience year-on-year. In an increasingly competitive sporting landscape, IBM’s technology innovations are critical to continuing our journey towards a great digital experience that ensures we connect with our fans across the globe – wherever they may be watching and from whatever device that may be,” said Alexandra Willis, Head of Communications, Content & Digital at the AELTC. “With help from IBM, we are providing new on-site features in the SmartPhone apps such as the ‘Ask Fred’ assistant, allowing fans to plan their day at The Championships and make the most of their visit. Similarly, we are working with IBM to access additional insights in order for our fans to truly understand and share the moments that matter. This year, a combination of design and data driven content and insights will provide fans with the unique Wimbledon experience they expect and more.”

“At the heart of Wimbledon’s technology are IBM’s cognitive solutions delivering the best insights and analysis possible to the AELTC to encourage great fan engagement,” said Sam Seddon, Wimbledon Client & Programme Executive, IBM. “Cognitive computing is the next revolution in sports technology and working with us, Wimbledon is exposed to the foremost frontier of what technology can do, as we work together to achieve the best possible outcome for the brand and the event. Cognitive is now pervasive from driving the fan experience, to providing efficiency for digital editors to IT operations.”

New-gen Security for Smart devices Becomes a Must

Collaborative CIOs Can Use The Cloud To Empower And Engage The...