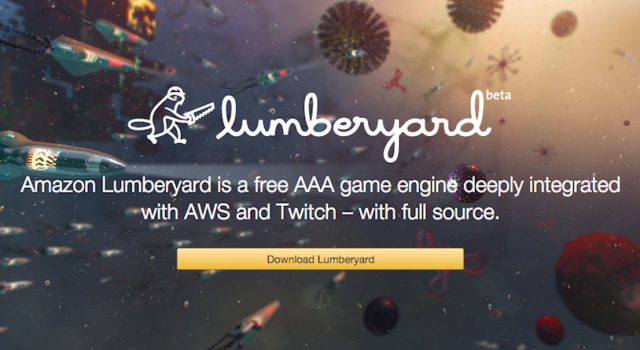 Building technology capable of making the highest-quality games is difficult, time-consuming, and expensive. Game developers either have to spend several years creating the more than 20 significant technology components that are needed to build the highest-quality games (such as real-time graphics rendering, world and character editors, animation systems, physics simulation, low-latency networking, particle systems, scripting systems, terrain generation, and more), or they have to invest in commercial game engines that are expensive and do not include native integrations with Twitch or cloud back-end technologies (like AWS). And, as live, multiplayer games have risen in popularity, game developers have also had to invest thousands of hours to build and manage the back-end infrastructure needed to connect their games to the cloud and support high volumes of fluctuating player traffic.

Amazon Lumberyard is the only game engine that gives developers a combination of free, feature-rich development technology, native integration with the AWS Cloud to make it easier for developers to create live and multiplayer online games, and native integration of Twitch features that help developers connect their games to the world’s leading social video platform and community for gamers. By starting game projects with Amazon Lumberyard, developers are able to spend more of their time creating differentiated gameplay and building communities of fans, and less time on the undifferentiated heavy lifting of building game engine components and managing server infrastructure. And, with Amazon GameLift, developers can be sure that on day one, their live, multiplayer games can scale to support millions of players, while maintaining the high performance gamers expect.

“Many of the world’s most popular games are powered by AWS’s technology infrastructure platform,” said Mike Frazzini, Vice President of Amazon Games. “When we’ve talked to game developers, they’ve asked for a game engine with the power and capability of leading commercial engines, but that’s significantly less expensive, and deeply integrated with AWS for the back-end and Twitch for the gamer community. We’re excited to deliver that for our game developers today with the launch of Amazon Lumberyard and Amazon GameLift.”

With Amazon Lumberyard, game developers can:

Amazon GameLift, a new managed service for deploying, operating, and scaling session-based multiplayer games, reduces the time required to create multiplayer back-ends from thousands of hours to just minutes. With a few quick steps in the AWS Management Console, developers can deploy game servers across the AWS Cloud, start connecting players to games, and scale capacity up and down to meet player demand. Developers can also identify operational issues using Amazon GameLift’s real-time reporting of game server capacity and player demand. With Amazon GameLift and Amazon Lumberyard, developers can create multiplayer back-ends with less effort, technical risk, and time delays that often cause developers to cut multiplayer features from their games.

“Amazon has been a great partner and we are deeply excited about both Amazon Lumberyard and Amazon GameLift,” said Josh Atkins, Vice President of Creative Development, 2K Games. “The integration of a fantastic game engine with amazing cloud services presents a wonderful opportunity for both independent developers and established publishers.”

“Developing and maintaining a back-end infrastructure for multiplayer games requires a lot of time, resources, and expertise that are beyond the reach of many developers,” said Chris Jones, Chief Technology Officer, Obsidian Entertainment. “Amazon GameLift removes much of that burden from the developer, allowing them to focus their energy on bringing their great game ideas to life.”

Amazon Lumberyard is available for download in beta for PC and console game developers. The Amazon Lumberyard engine is free to use, including source. There are no seat fees, subscription fees, or requirements to share revenue. Standard AWS fees apply should developers choose to use other AWS services.

Amazon GameLift is available at launch in the AWS US East (N. Virginia) and US West (Oregon) Regions, with additional Regions coming soon. Amazon GameLift costs $1.50 per 1,000 Daily Active Users plus the standard AWS fees for AWS services they consume.

What is a blockchain? Building trust in bitcoin

Enterprise mobility is not an app, it is a way of...