The Empires Strike Back

We’ve closely tracked the rivalry between Amazon and Microsoft for global leadership in the monthly #CloudInfluence rankings this year, and we saw Amazon take the lead over the summer.

We wondered if this might be a significant shift in mindshare or whether it was simply a blip with Microsoft being temporarily distracted by the Windows 10 launch. We can now see that it was indeed just a blip, and while Amazon, along with Google, has fallen away, Microsoft and many of the other old empires (IBM, Oracle and even HP) are striking back! 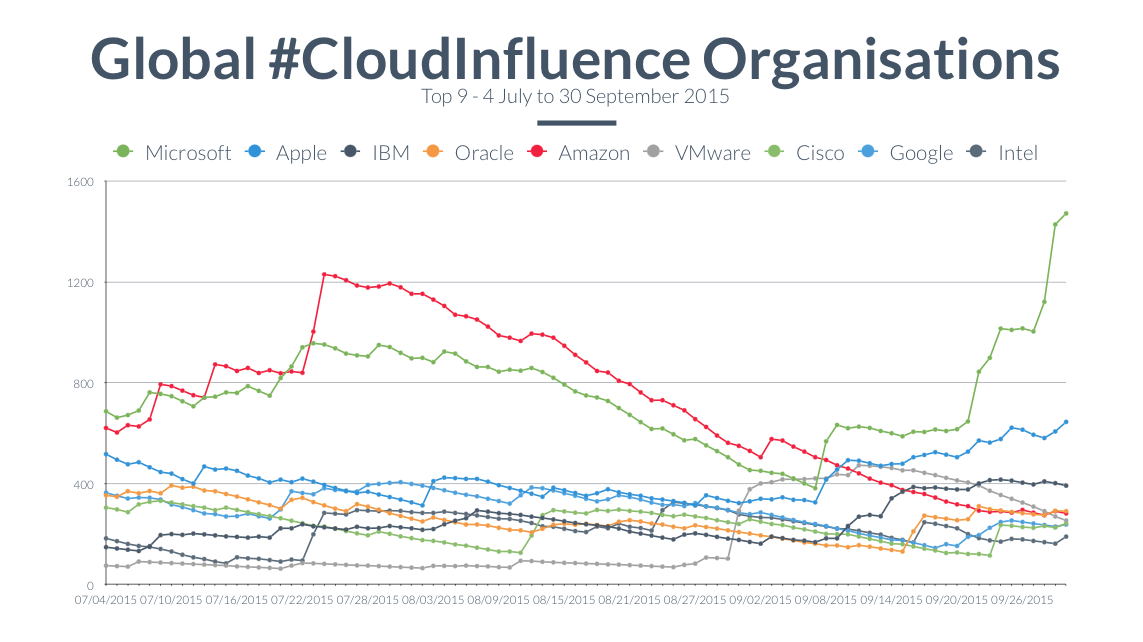 Any idea that Microsoft might have taken its eye off the ball and been distracted by the Windows 10 launch was dispelled this month with a flurry of activity and announcements regarding Microsoft Azure. The cloud platform not only got updates for big data, security and IoT, but also a new Azure Container Service, and competitive new pricing with the Azure Compute Pre-Purchase Plan. OneDrive for Business also got updates for security and data loss prevention. These were just some of the announcements coming out of its Azure Convention – a great overview is given here by Computer Business Review: 10 big things that happened to MS Azure this week

Apple stood alone as the only consumer brand in the top of the rankings. It saw a surge of coverage of its cloud-based services – including its music streaming.

IBM and Oracle in 3rd and 4th marked a resurgence of the old guard. Even HP that had previously struggled to make it into the top 50, rose all the way to 19th. All of these tech behemoths are investing heavily in cloud. IBM acquired both StrongLoop, a leading provider of enterprise Node.js capabilities, and Meterorix, a Workday services partner. Meanwhile Oracle launched two new additions to its cloud platform for integration: Oracle SOA Cloud Service and Oracle API Manager Cloud Service, a suite of tools that allow users to integrate on-premises and cloud-based applications. 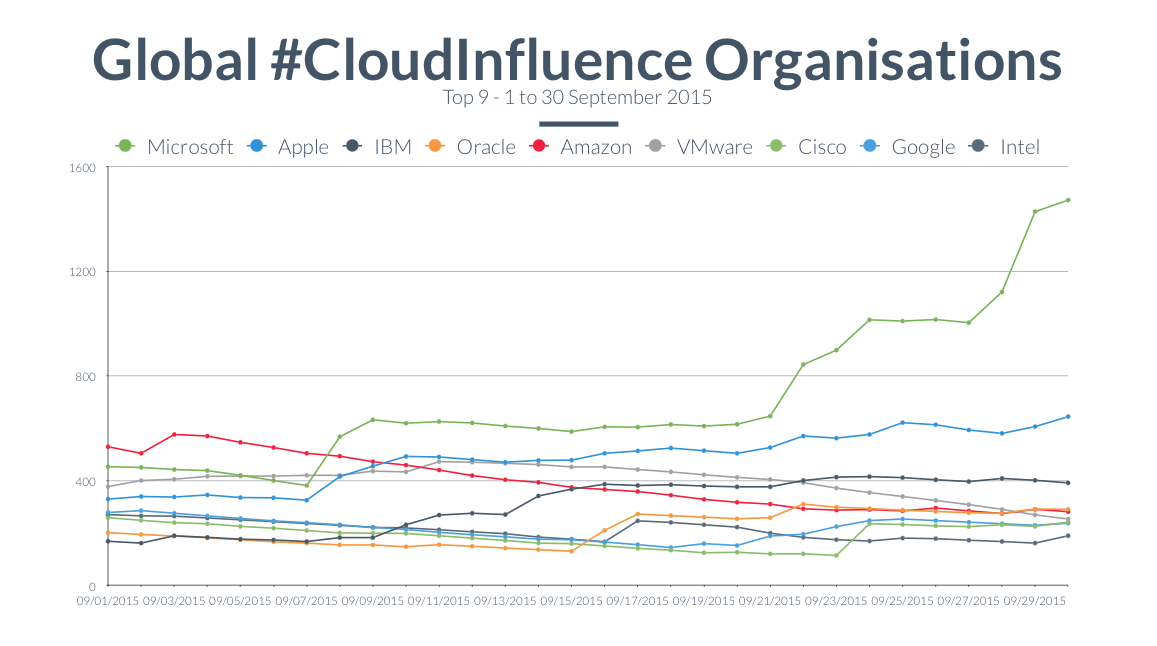 This left Amazon in 5th, its lowest monthly ranking all year. It is all to likely however that having witnessed the ‘Empires Strike Back’, we will see the ‘Return of the Jedi’ as Amazon hosts its Amazon Web Services (AWS) re: Invent Conference on October 6-9 and the AWS faithful flock to Las Vegas. This will of course, then be followed by the OpenStack Summit in Tokyo. It will be interesting to see the level of excitement that each tribe is able to generate. VMware in 6th will be a major participant in the Tokyo event alongside HP and many of the other main private cloud players.

Fast cars and fast data: Formula One lays out a winning...

The cloud as a revenue generator

#TransformCIO Episode 3 – Interview with the Arcadia Infrastructure and Services...