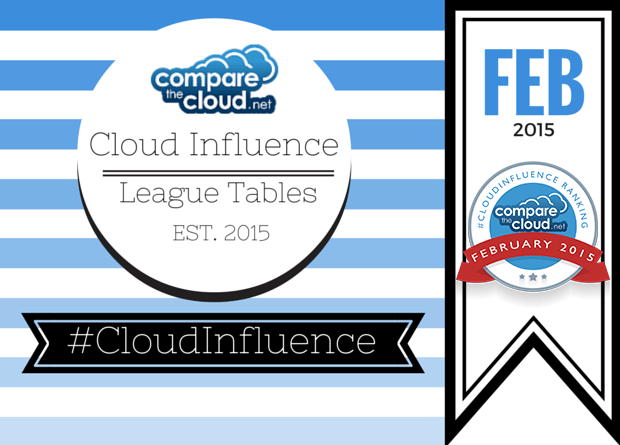 There was a high rate of change in the Global Top 50 #CloudInfluence Individual League Tables with only 11 of last month’s top 50 appearing in this month’s rankings.

For the rankings we exclude journalists and other authors who tend to report other people’s opinions and focus instead on the key opinion holders themselves – those that tend to be quoted in any such articles. January’s rankings are shown in square brackets when applicable.

Security issues set the agenda this month as Marc Rogers [3], Principal Security Researcher at CloudFlare, climbed to 1st place with widespread comments on security issues. He was quoted widely on the volume of malicious traffic coming from Tor exit nodes and the Lizard Squad attack on Lenovo.

With a brief lull in corporate announcements, Satya Nadella [1], President of Microsoft dropped to 4th. Meanwhile, evangelising about how Solgenia Group has leveraged revenue generating capability of cloud consumption, catapulted Ermanno Bonifazi, the firms’s founder and CEO into 5th in our rankings.

Widely quoted championing the contribution of the channel, and explaining that as organisations become more willing to adopt cloud technology and services, the demand for experienced solution providers is rapidly increasing, was Robert Faletra [25] who came in at 6th place, the CEO of The Channel Company.

Vint Cerf, Google Analyst, and one of the fathers of the internet, appeared in 7th warning that we risk becoming a “forgotten generation” or even that this will be “a forgotten century” because as computer hardware and software become more quickly obsolete, we are losing information. Major General James Linder of the US Army appeared in 8th position, quoted widely that the U.S. military was introducing a Cloud-based technology to allow African allies to quickly share intelligence across borders, such as mapping information for the location of potential targets.

In 9th and 10th were two IBMers, Robert LeBlanc, the new SVP for IBM Cloud, and his boss Virginia (Ginni) Rometty [5], IBM’s CEO. Both were quoted in the raft of cloud announcements from IBM InterConnect covering new services, data centres, customers and partners which helped boost IBM from 6th to 2nd in the #CloudInfluence organisation rankings. They also announced a $4 billion investment with which IBM says it plans to increase revenue from growing areas like cloud computing to $40 billion by 2018 as the battle for mind share and market share hots up.

Executives from firms featured in previous #CloudInfluence rankings. Helping to promote his company into a position of prominence in this month’s organisational rankings was Marc Benioff, CEO of Salesforce.com – well on its way to becoming the fastest company to achieve $10 billion in revenue. Also reflecting the data centre consolidation highlighted in the February special report on data centres, were David Ruberg in 11th, CEO of Interxion and Craig Young, CEO of Megapath, in 48th.

Up and Down: Notable Risers and Fallers

Showing how quickly you can fall in the rankings if you go quiet and fail to sustain a constant flow of comment were executives such as Dennis Woodside [2] the COO of Dropbox who fell to 18th, and Martin Schroeter [6] IBM’s CFO who rarely makes public comment other than for results or shareholder meetings. Schroeter fell out of the Global 50 this month entirely due to his lack of comment.

We were interested to see Navnit Singh, Chairman and Regional MD for India at executive search firm KornFerry International appear in 18th following his comments that AI (artificial intelligence) and cloud delivery models are changing the employment landscape, with only incremental growth being seen in hiring for middle management and below in IT services. We were also delighted to see a Brit appear in this month’s rankings – Simon Porter VP of IBM and a prolific force in social media in 25th place.

Check back tomorrow for the February UK #CloudInfluence League Tables, and the cloud bursters league table.

What are the Basic Characteristics of the Learning Times of the Efficiency Data Scientist Work?

What next for Social Business? Patchwork Elephant Event Report

Top 7 Mobile App Development Trends To Be Watched Out In...

The growth hack tips that could help build your startup