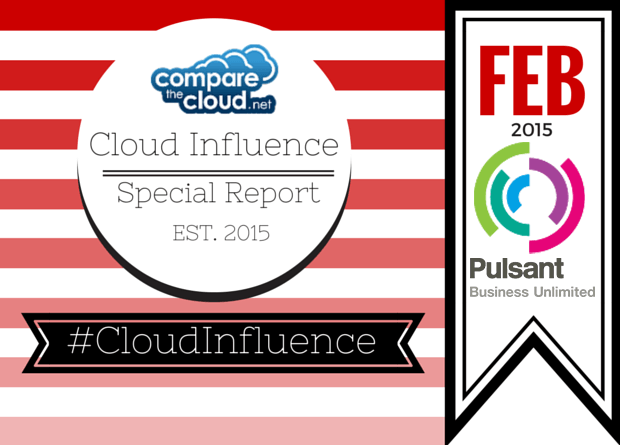 As part of our 2015 #CloudInfluence program we will not only be publishing the Compare the Cloud #CloudInfluence rankings at the start of each month (focusing each time on the preceding 90 days), but we are also aiming to publish a special report in the middle of each month on a related topic area. This month the #CloudInfluence Special Report focusses on data centres.

In a previous life I was an Officer in the Royal Navy. I joined straight from school and signed up for a full 22 year contract (longer than I had lived at the time) certain as I was that it was the career for me. As it happened this career was cut short on medical grounds after just four years and a new career in the high tech world beckoned. It showed the perils of seeking to predict things to far ahead.

“The interesting thing about cloud computing is that we’ve redefined cloud computing to include everything that we already do … the computer industry is the only industry that is more fashion-driven than women’s fashion. Maybe I’m an idiot, but I have no idea what anyone is talking about. What is it? It’s complete gibberish. It’s insane. When is this idiocy going to stop?”

I’m not about to suggest that Larry is any kind of idiot, but it is now plain to see that cloud is here and that it is seriously reshaping the world around us. It is however right to caution against some of the more superlative hype associated with cloud – the fashion-driven aspect that Larry referred to. It was brilliantly summed up recently in this Dilbert cartoon, https://twitter.com/securebusiness/status/520524659193040896/photo/1.

A more realistic perspective is required in the data centre market. Seeing through the hype and focusing on the real opportunities as the sector matures and consolidates in essential. And with massive long-term infrastructure investment required, a long term perspective is also vital.

Another lesson that I learned in the Royal Navy was that most of the attention might well be focused on what happens in the bridge, but it is down in the engine room where a great deal of the hard work occurs and without a smooth running engine room no amount of noise on the bridge is going to get you anywhere. The engine rooms for cloud are the data centres – and there are over a thousand key data centres across Western Europe which we have identified.

While there is enormous buzz about cloud across social media, in the press and in blogs, there is relatively little about data centres. Our big data analytics showed that the community of influencers focusing on cloud was over ten times as great as the community focused on data centres, even though there was a good degree of overlap with more than half of all articles, blogs or tweets that focus on data centres also focusing on could issues.

Looking specifically at which organisation had the most influence on data centre issues, our #CloudInfluence Special Report analysis on data centres found that Digital Realty Trust came out on top. Timing is everything though. Had the report come out at almost any time over recent months Digital Realty would have stood head and shoulders above the rest, however the recently announced Telecity Interxion merger boosted the profile of both companies. Telecity therefore came a close second to Digital Realty, with Interxion in 4th just behind Equinix, another key player in the market.

The Telecity Interxion merger also impacted the table of the top individual influencers in the data centre market. David Ruberg from Interxion topped the list followed by Jim Poole of Equinix and A William Stein at Digital Realty, following the announcement of organisational changes at the firm. Raul Saura from T-Systems Iberia was quoted widely following the announcement that Emerson Network Power had been selected by T-Systems to construct one of its largest modular data centres in Spain, as was Scott Barbour, business leader of Emerson Network Power. Aaron Binkley from Digital Realty appeared in 6th commenting on sustainability, followed by David Wilkinson of Equinix after the major deal with the Asia Pacific Stock Exchange that will see APX’s new trading platform deployed in Sydney data centre SY1. In 8th was Ivo Pascucci of TeliaSonera commenting on their extended 100G connectivity with the US.

Finally the announcement by Verne Global that it had secured US$98M of equity funding, led by Stefnir, an Icelandic asset management and private equity firm that is working with several of the largest Icelandic pension funds, ensured that both Isaac Kato of Verne and Arnar Ragnarsson of Stefnir made it into the top ten this month.

As the market consolidation continues, as seen recently with the Telecity Interxion merger, we expect the data centre influencer field to be dominated by the same large players and their executives. In the engine rooms where the real work is done, these are the real cloud heroes.

It’s Time to Clean up Your Cloud CRM Data

Adapting your data protection measures for the cloud

How the cloud has enabled BYOD