As the cloud infrastructure market expands, the service offerings being made available to end users are growing and evolving.

This shifting landscape has helped major players, such as Google Cloud and Microsoft’s Azure, enjoy strong growth over the last year. But, despite their recent success, both still trail behind the clear market leader, Amazon AWS – and by some distance. 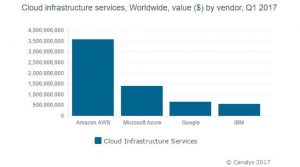 While both Azure and Google Cloud have strong plus points that are helping them to gain ground, neither yet have the same reach, scale or experience of AWS. All of which provide AWS with a head start on their competitors. These include the following:

When choosing between cloud infrastructure providers, the decision can often come down to the range of features available to the end user. In this respect, AWS has the advantage simply because it has a bigger offering than its competitors. The broader range of resources can allow you to build your infrastructure in different ways and with AWS, many are supported by a range of dedicated services.

For example, AWS provides a managed service for Elasticsearch for log analytics, full-text search and application monitoring. This makes it easier to deploy and scale this technology quickly as the necessary technical assistance is available.

AWS is much more technology agnostic, compared to other cloud providers. For example, if you are used to working with the Linux operating system (OS) you would be far more likely to choose AWS over Microsoft Azure which is far more focused on Windows OS.

While there can be advantages to dealing with just one cloud infrastructure supplier – you have only one supplier to chase on technical assistance and support queries, for example –  it can be beneficial to give yourself flexibility. If you are not overly dependent on one supplier, you can then spread the risk in the event of a disaster. In this respect, AWS doesn’t tie you too closely to any one technology provider, providing a freer, more risk-averse option for long-term planning.

It is worth noting that although Kubernetes – the future of the cloud – is the brainchild of Google, most of our customers are choosing to deploy this technology in AWS. This is despite Google providing a managed IaaS offering.

The size of this community is a major deal. The reality of developing cloud infrastructure is that it involves the integration of a large number of building blocks. This includes a huge variety of technology products and services that provide you with the required storage, computing power and databases as well as the tools that make it easier to pull everything together. The cloud market is also highly innovative with new options becoming available to us all the time.

When it comes to integrating the latest technology, AWS’s position as the market leader gives it a clear advantage. With a much larger user base, it has a much bigger community to draw upon whenever advice is required to support a project.

The ability to draw on their experiences and expertise can offer a significant shortcut when determining the best way to proceed. This makes it quicker and easier to design and develop an architecture that supports the needs of individual businesses with unique sets of requirements. It is also a key reason why most of our customers are deploying Kubenetes in AWS over Google.

[easy-tweet tweet=”AWS stressed the importance of security within its company values” hashtags=”Security, AWS”]

At its most recent annual Summit, AWS stressed the importance of security within its company values – and it is doing that in the UK by tackling data sovereignty issues. When AWS opened a data centre in London at the end of 2016, it started to build up a secure and reliable cloud system for its UK users – allaying common fears about the lack of data privacy for those organisations with data in other European locations.

It has plans to expand further in the future, with facilities also proposed for IX Manchester. Even with Brexit looming, the message is clear for British AWS users: keep calm and carry on.

With these guarantees and a more localised service, AWS continues to cement itself as the major player in the cloud services market – and this is also helping to address latency issues. Although companies like Netflix have managed to reduce this as an issue – by building up CDN networks to support their businesses around the world – AWS’s large global network of data centres is offering a helpful option for sectors such as telecommunication or e-commerce, where speed is a major concern.

The Impact of GDPR on SMEs

Why are businesses shifting to hosted desktop solutions?

Avoiding delays and diversions on the journey to the cloud