Whilst at the LinuxCon event in Seattle this year we caught up with Leonard Santalucia, CTO Vicom Infinity. Vicom Infinity is one of the Founders of the Open Mainframe Project, which was announced at the event.

Vicom Infinity is based in the heart of NYC with additional offices outside the city. They provide customers with sophisticated IT solutions, through world-class IT products and uncompromising service by leading customers through an information technology transformation with zero impact on business operations.

Len established an IBM Linux on z Systems Mainframe Executive Customer Council on Wall Street, and 15 other councils across the USA. IBM is still running most of these councils today (they were originally formed over a decade ago), and consulting with Len to help run them. Len also started the “Linux Center of Competence” at IBM HQ on Madison Ave in NYC, ensuring the knowledge and skill advancement for Linux on the mainframe was well understood and supported.

So, with all of these achievements under his belt we think that Len was ideally placed to comment on the launch of the IBM LinuxOne, a purpose built mainframe for Linux environments – the only one of its kind released on the 17th of August this year! What did Len have to say about this? Well there’s no surprise that he had a lot to say.

“To see a purpose built product based on mainframe architecture from IBM, the LinuxOne, is absolutely fantastic.”

“It’s been an amazing journey over the last 50 years for the mainframe. To see a purpose built product based on mainframe architecture from IBM, the LinuxOne, is absolutely fantastic. Support for Ubuntu, Red Hat and SUSE, as well as having the scale of a powerhouse computing environment, is an excellent move. The reliability, availability, integrity, and security of a z System mainframe simply cannot be matched today by x86 technology. This is why Linux on z Systems has been so widely adopted across both the public and private industry sectors, even before the purpose built LinuxONE product line was released and I am very proud to say that I had the honour and privilege to be a part of the process!

“In today’s age Mobile agility is a must together with security and redundancy. A z Systems mainframe that can supply you with Hypervisors and Open Source Software that even stands up to earthquake simulations let alone a complete in-built resilient set of architecture, takes away any doubt that could keep you awake at night. We are also very proud that Vicom Infinity is considered a key go-to-IBM Premier Business Partner for Linux on the Mainframe for Cloud, Analytics and Mobile service applications and implementations. This plays well into the hands of the traditional Managed Service Provider that can now offer hosted services from one of the most secure resilient computing environments ever made. With services such as Printing-as-a-service, Database consolidation for database-warehousing-as-a- service as well as amazingly fast I/O throughput that handles hundreds of thousands of transactions per second securely. This coupled with a new flexible pricing model that allows clients to only pay for what they use and not the entire system! As an example, the LinuxONE can run as many as 8000 Linux VMs and also run effectively at 100% utilisation – You tell me what x86 environment can do that!”

I doubt that there is anyone (certainly no one we know) who could question Len’s comments, the facts of LinuxONE speak for themselves. It’s a very strong move by IBM to release a new mainframe product line that caters to the brave new world of Open Source but I think a smart one. With elasticity for computing resources as well as security, key for Cloud Computing today and for the future IBM has insured their place as one of the main driving forces behind mission critical service provisioning while catering for new services coming through the ranks offered by service providers, for possibly another 50 years to come. 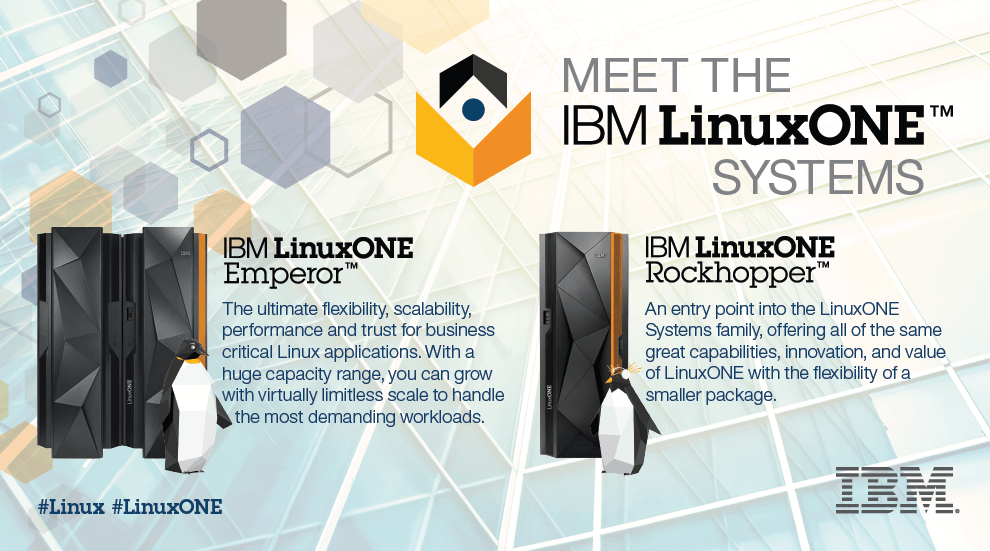 The new IBM LinuxOne product range, aptly named after Penguins “Emperor – for the large scale enterprise and the Rockhopper, the entry level model”

Why Now Is The Time To Enter eCommerce