A View On The Cloud Dream In China

Today when we look at the Chinese market we think of it as an OEM (Original Equipment Manufacturer) or white label goods provider, goods that are produced in China and rebranded for sale elsewhere, such as Apple iPhones.

On November the 20, 2012 China’s newly elected president, Xi Jinping spoke about a term known as the “China Dream.”

This dream in terms of cloud and technology is for China to move beyond a manufacturing economy to one of technical greatness. China wants to become the designer, producer and retailer of these solutions, not just the manufacturer.

It is unjustified to maintain that most Chinese innovations are derived from reverse engineering or technology repackaging. While it may have been true in the past or remain true in certain areas, the China of today has surpassed that. Real innovation is now commonplace in China, just as it is in countries which previously were just markets for outsourced skilled IT labour, such as India.

The technical community in the Western Hemisphere is always keen to focus on the ‘hyper-scale’ cloud vendors such as AWS or Microsoft Azure, but in terms of sheer scale and population density there is no region that matches China – a country that epitomises ‘hyper-scale’ in every sense. 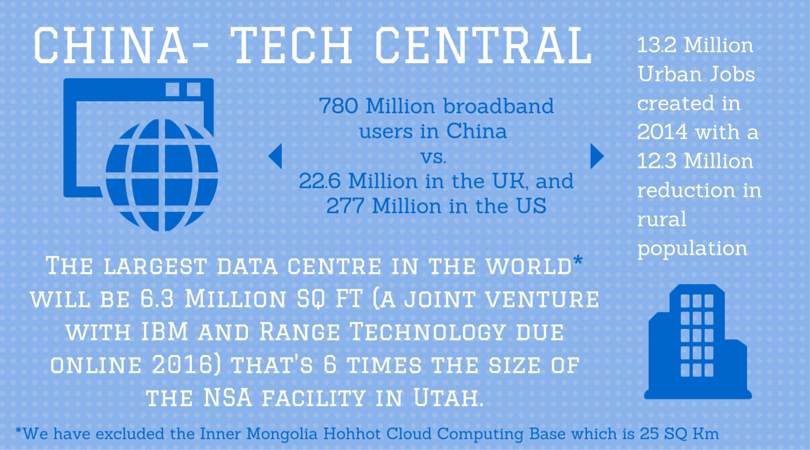 In China acting at such massive scale, call it ‘Hyper-scale’ if you wish, is normal. Some Chinese banks have as many customers, and therefore as many accounts to manage as the total that half the local banks in Western Europe manage. China Unicom has over 400 Million subscribers and counting – that’s more than the entire population of the US, and about the same as the entire population of Western Europe. Now step back and think of this for one minute, that’s 400 Million subscribers, all using mobile internet. The magnitude of the systems, data centres, and infrastructure required to power such a huge number of users is immense in both technical and organisational terms.

To achieve true ‘hyper-scale’ globally a cloud platform has to be ‘road tested’ with millions of subscribers. There is only a few cloud providers who can make this claim today.

To develop and continually improve the everyday feat of technical engineering that is the Chinese market, networking company Huwai (a Chinese company known internationally as telecommunications giant Huawei), has been investing globally in a number of universities (approximately 20) to develop 5G technology with an estimated $600 Million investment committed to 2018. It is our belief that this significant innovation and investment alongside a solid partnering strategy will push Huawei to stratospheric heights internationally, and enable it to become the dominant force and de-facto choice for all new 5G deployments.

When we think of technical and development hotspots, one usually assumes the Eastern European or Indian subcontinent as key areas. India has certainly become a key player in the worldwide technical economy with companies such as Tata Infotech and Infosys becoming common brands amongst the Enterprise CIO elite.

India has benefitted from significant investment from offshoring contracts ranging from software development through to call centre operations. These contracts originate in both Europe and the US, but the cost of development in India is now rising rapidly with increasing salary demands and infrastructure burdens altering the balance in favour of new entrants to the offshoring market, such as China.

An example of success dates back to 2008 when IBM and the City of Wuxi created the first cloud computing shared service. This service, whilst initially slow to gain traction, has now broken into profitability and succeeded in penetrating its core market.

China is reinvesting the profits from its manufacturing success in skills for the future. Chinese Universities are now turning out 7.5 Million graduates a year (London’s population in 2013 was 8.038 Million).

A lot of technology companies today evangelise and promote the term IoT or Internet of Things as part of a vision involving a proliferation of connected devices. So what does this mean to Chinese manufacturing and cloud computing? The simple answer is ‘computational and analytics processing on a scale never seen before’. Imagine the sensor data from all those factory machines, ranging from RFID outputs through to nanotechnology, with the computational need to collate, store, retrieve, process and analyse all this data. This will require cloud resources of monumental proportions combined with the necessary software, services and consultancy to make achieve a successful result.

As Red Army commanders have always understood, China’s greatest asset is its people. Even when ill equipped the Red Army made its numbers count, but imagine for a moment if they were as well equipped as any Western army. In engineering and technology this will soon be true. China is reinvesting the profits from its manufacturing success in skills for the future. Chinese Universities are now turning out 7.5 Million graduates a year (London’s population in 2013 was 8.038 Million). So that’s 0.5 Million short of the population of London per year being highly educated and moved into the Chinese workforce. It makes the 46,000 engineering graduates in the UK each year look like a rounding error. For every three engineering graduates being produced in the UK there are 500 being produced in China.

China is perceived by many to be ‘the worlds factory’. I suspect we have all lost count of the number of times the impact of cloud computing has been compared to the industrial revolution… so if cloud is the ‘industrialisation of Information Technology’ why would the ‘worlds factory’ not be in a perfect position to be the worlds cloud partner?

UK and European companies should look at the wider opportunities available and embrace the operational / cultural considerations needed to become a partner in the China dream.

Wearing It Well: Is Field Service The Killer App for Wearable...