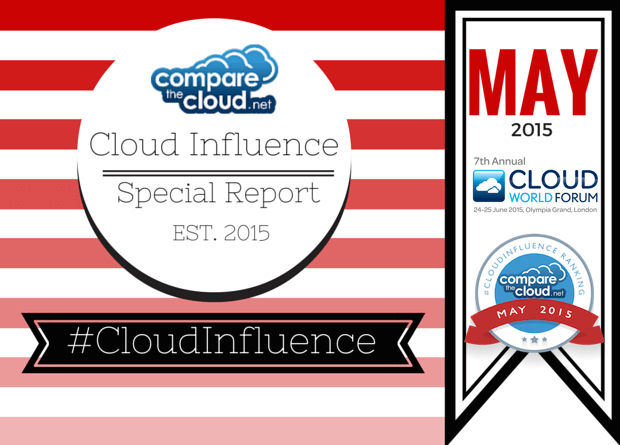 In the run up to Cloud Word Forum 2015 , 24-25 June at Olympia in London, we wanted to take a look at the Battle of the Big 5, not just in area of cloud, but also in big data and in the Internet of Things (IoT) – both of which are part of a breakout stream at Cloud World Forum this year.

So in our #CloudInfluence special report this month we decided to reflect how successful each of the main players had been in gaining attention for themselves in each of the three key battle grounds: Cloud big data and IoT.

Other challengers: … come to Cloud Word Forum 2015 to meet a few!

Cloud is a very hot topic, with a high level of activity every week over the last few months (the light blue bars on the chart), with a gently increasing attention index (the purple line) and consistently positive sentiment (the orange line).

As our monthly rankings have shown Microsoft has maintained an impressive lead in #CloudInfluence over recent months. The recent disclosure by Amazon of its AWS financial briefly boosted the firm’s profile, moving it ahead of IBM and within reach of Microsoft, only for Microsoft to pull ahead again.  Google and  SAP then lead the rest of the pack. 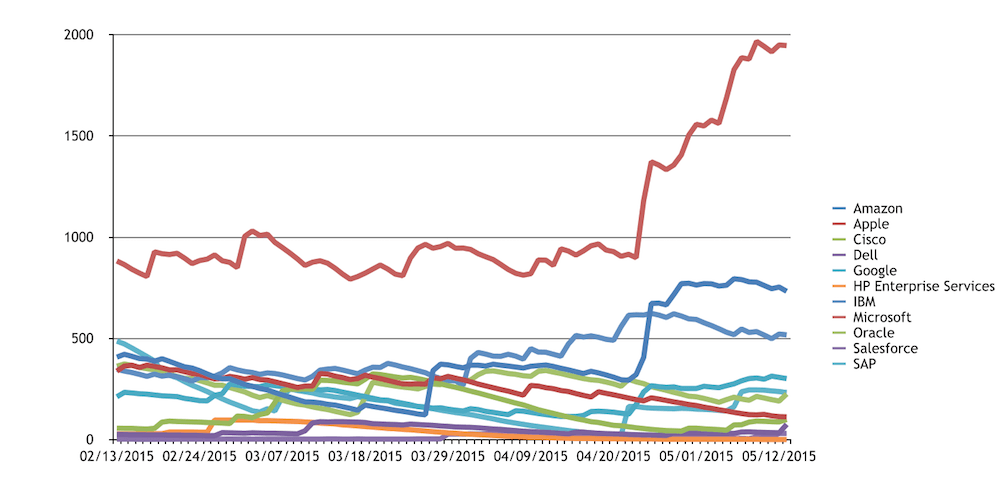 Other challengers: … join the IoT & Big Data stream at Cloud Word Forum 2015 to meet a few!

Big Data is also a very hot topic, even if not quite as hot as cloud. Following a peak of activity in mid February, activity has been a little subdued with the overall attention index fluctuating, but not rising to any real degree. Sentiment has remained positive, but not as positive as for cloud.

For a long period until the start of April Pivotal held the lead in big data, but following a period in which many of the players contested the overall leadership, Microsoft emerged as the leader, only to be pipped very recently by Hortonworks.

Other challengers: … join the IoT & Big Data stream at Cloud Word Forum 2015 to meet a few!

IoT is another hot topic. It experienced a peak of activity in early March, but the overall attention index has remained fairly level, with sentiment remaining positive all along. All of this has been at a far lower level of activity and attention than for cloud.

The lead in IoT has changed hands on a number of occasions recently: from Microsoft, to Intel, to Microsoft again, to IBM, back to Microsoft and then on to Samsung. 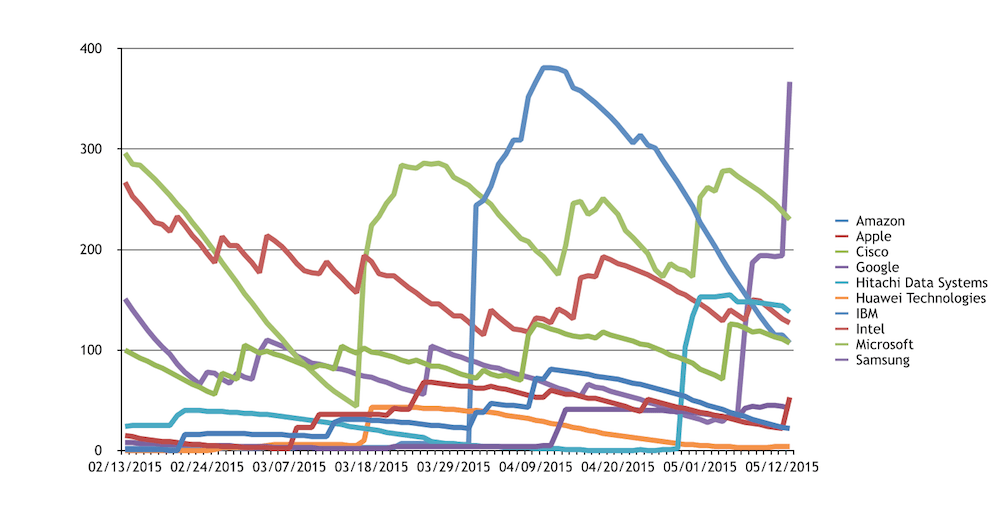 Obviously all of these battlegrounds are interlinked, with IoT devices feeding information into the cloud for big data analysis. And of course competition between the big 5 will continue as they do all they can to grab attention and a leadership position in each of these areas. Tactics will include ecosystem support, the announcement of new products and services, alliances with other key players (as IBM has done with Twitter, Facebook, Tencent, Apple, etc.) and a host of other marketing initiatives. Some will also make strategic acquisitions, with Salesforce being in play at the moment. We will track all of this as it unfolds and share valuable insights with you via our monthly #CloudInfluence rankings and our special reports (such as this one). We will also be at Cloud World Forum where some the top players and a host of the challenger firms will be speaking and exhibiting, and where we will be doing video interviews with some of the top executives from our stand. We hope to see you all there.

5 Value Imperatives for How to Measure Virtual TCO in 2016

Choosing your cloud – the good, the bad and the ugly