There are some things going wrong on G-Cloud. There’s some going right. There’s finger-pointing and name-calling.

[easy-tweet tweet=”G-Cloud can be good for public services, citizens, taxpayers and our industry – if it goes right” hashtags=”Cloud”]

Personally, my focus is SaaS, but you’ll be onto a safe bet if you think 90 per cent of this applies to IaaS, PaaS and SCS (Specialist Cloud Services).

And just so you know, I’m all in favour of G-Cloud. It’s good for public services, citizens, taxpayers and our industry – if it goes right. It can deliver competition, flexibility, efficiency, new ways of working and new outcomes.

Currently, it is doing some of this, but it can do more and it needs to grow-up a bit. Like any new market, like any new organism, it’s immature in its early years. Tend it, root and branch, and it will bear fruit. 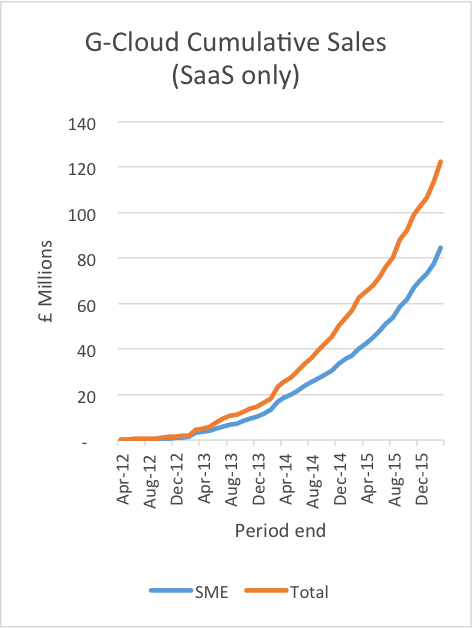 So that £60 million is a much bigger figure than those with which we may be judging it, but nevertheless, it’s still £60 million, which is not enough.

It is working for some. 100 SaaS vendors made over £100,000 in sales over the 12 months to March 2016. Revenue figures likes this have significance – anything over £100,000 and the market can sustain one FTE. Any CEO has got to believe they can get to that sustainable level of revenue in a reasonable space of time, or they should go find a better market.

But we have been running four years and 1,200 unique SaaS vendors are not yet at the magic number. Over 1,100 sold nothing in the last 12 months. So 8 per cent are making a living or better and 92 per cent aren’t.

Here is a worthy quest. You see, I know these companies. They are some of the most successful, entrepreneurial and valuable companies in the economy. They are our good-news, growth industries. They have the brightest talent, hardest working, driven individuals and teams in UK PLC (OK and from our trading partners, no slouches there either). And yet, 92 per cent of them are selling diddly-squat – Why?

My three-year stint running EuroCloud in the UK, the trade association for supply-side cloud businesses, has given me great insight and access to vendors, CCS (Crown Commercial Service), GDS (Government Digital Service), public sector customers and professional advisors across the field.

I hear a lot of excuses. A lot of myths are being spun. But I don’t buy-it.

On the whole, the vast majority of procurements are totally fairly run, under the rules. No one has “stitched-up the market”, there’s no “old-boy network” and the 100 successful vendors didn’t all do their sales training at Hogwarts.

Try asking “why?” – that’s the most important three-letter-word for creating progress.

Well, I’ve found it. I’ve found the causes for failure and the non-functional contributors to greater success.

When functional attributes are a cause for failure the vendor gets eliminated on a shortlist because price is too high or the solution doesn’t have required functionality. This is just straight competition – it’s little different from what vendors face in the commercial sector. Considering only vendors who are reasonably successful outside G-Cloud; I can assume they have adequate functional attributes.

For vendors which are successful outside G-Cloud but not on G-Cloud, then it’s something in G-Cloud we need to look for to explain failure and success.

Is G-Cloud a broken framework, incapable of supporting significant SaaS transaction volume? Well it has weaknesses. For example, I’m not keen on the 24 month maximum contract term – that’s a hostage to ransom. If a customer has to invest a lot in implementing a new system, but doesn’t know what the price to renew will be in month 25 they won’t buy through G-Cloud or if they do they expose themselves to exploitation.

But, are the conditions stipulated for doing business on G-Cloud so poor that this is the cause of failure? As the above 24-month contract term example indicates, there are a number of structural features of the framework that effectively limit the scope of G-Cloud as a SaaS marketplace. It was always intended for the more commoditised services. But, as 100 vendors made £55 million in the last 12 months, someone is making decent returns in a young market against the headwinds of austerity, conservatism, risk-aversion and inertia. So I deduce, it’s not something chronically wrong in the state of G-Cloud, because 100 vendors are the proof it can and does work. So, it’s something wrong with the 92 per cent; we need to look where the unsuccessful are different from the 8 per cent which are making hay.

Yes, that’s right Watson, when you’ve eliminated the impossible, whatever remains, no matter how improbable must be the truth. It could just be our fault, the fault could be with the vendors who aren’t succeeding.

And, to cut a long story short, it is. The evidence, when you look for it, is very clear. The conclusions are documented and detailed guides on how to cure any of the various ailments I’ve uncovered are all in G-Cloud Success, Analysed (and Failure Explained).

From this work I can probably save some 400+ companies 9 months and £50,000 or more, each, by making the following big, tactical recommendation:

If you have been on G-Cloud for over 12-months and have not made a sale or been notified you are on a shortlist and you are copying your G6 or G7 details to G-Cloud 8.

You don’t have to be Einstein to work out it’s insane to leave everything the same while hoping things will change.

Our SaaS vendors are gifted and successful in their commercial field. But G-Cloud is a different game. There is a linear pathway to success: understand the new rules, adapt to the new playing field, learn and understand the techniques and equipment – only then can your natural prowess win through. I call it the G-Cloud Maturity Model. Establish where you are now, plan what you need to do to get to the ultimate level – where your product and sales ability will win.

The G-Cloud Maturity Model for Suppliers

What are the steps needed to succeed on G-Cloud?

G-Cloud is continually evolving. It is growing up fast and the demand-side (government managing agencies and public sector customers) are getting there. Don’t fret that they could do it more quickly, we vendors may be holding them back. If four in five vendors can’t even be considered for a procurement because of some fatal flaw in their paperwork – the customers are going to turn their back on G-Cloud and go back to their comfort zone of direct procurement.

We vendors are responsible for our own evolution, we need to appreciate where we are on the G-Cloud maturity model and make a determined policy to move to level three by the time applications are filed on June 21st. In most cases this can be achieved with surprisingly little effort.

We have to get it right for G-Cloud 8, a big leap forward: 8 per cent making sustainable business can be 33 per cent and if you have read this far and are determined to do something about it – then success is not far away. The extent of the work involved to achieve a compliant application which can successfully support your sales plan is often just a few hours, a morning’s concentrated effort. And the tools. Well, I have provided those:

It is priced at the equivalent of 4-hours consultancy, a value reflecting the personal investment of over 400 hours on this first, publicly available, in-depth study into success and failure on G-Cloud.

[easy-tweet tweet=”In #SaaS terms, £120 million has been spent in the four years G-Cloud has been around” hashtags=”Cloud”]

I wish everyone about to embark on G-Cloud 8 rich success; and I also take this moment to salute the hard working teams at GDS and CCS for creating and maintaining this magnificent opportunity.

New Funding for Development of Bio-active Implants that Speed Recovery