For many of us, when we think of wearable technology we think in terms of gadgets aimed at the fitness market, enabling sports jockeys to gather stats about their latest workout, heart rate, and mileage, or seen as toys for techies who want the ability to view text messages and weather forecasts on their watch. It’s yet to explode into mainstream life, and is certainly still nascent in the enterprise.

According to a 2015 Digital IQ survey, only three per cent of enterprises are investing heavily in wearable technology, down from six per cent in 2014. In business terms, many people view wearable computing as a technology that’s still in search of a business problem. Field Service is ideally placed to change all that with the potential to become the catalyst for the elusive ‘Killer App’ wearables will require in their quest for market adoption.

The convergence of major industry trends, such as the Internet of Things, Cloud Computing, Servitisation, and 3D printing are all nudging field service to the forefront of the business agenda. Embedded sensors, processors, software, and connectivity in products, coupled with a product cloud in which product data is stored and analysed and some applications are run, are driving major improvements in product functionality and performance. It’s also creating massive amounts of new product-usage data.

Ironically, as an industry that was relatively late to join the information economy, it could soon find itself at the leading edge of it in the next few years. Until just a few years ago, innovation in the Field Service industry was inching forward at a snail’s pace with manual processes and paperwork. The last two ‘revolutionary’ technologies to hit industry were mobile, which freed techs from the tedious hamster wheel of triplicate paper-based processes, and more recently the cloud, which empowered access and visibility to unprecedented amounts of information. The latter gave rise to the Field Service Management industry, modernising Field Service for the twenty first century with a dedicated business platform and automated end-to-end processes.

While mobile freed techs from paper, their hands were still tied. Today, if a field worker needs how-to instructions about a specific piece of equipment, can’t remember every step of a procedure, or needs to seek guidance from a colleague, he or she must literally put down their tools and stop what they’re doing while they log on, look up the information required on their smartphone, tablet or PC or make a phone call to someone who can advise them. This slows progress for both the technician and the customer in an industry where time is money.

With wearables, field techs have the potential to harness a range of supportive functionality, such as augmented reality, 3D visualisations, and video conferencing to gain critical information and better facilitate service calls. Schematics can be overlaid onto machines while they are servicing them and colleagues can help field workers in remote locations by seeing what they see onsite to lend support rather than incurring the expense of flying in an expert. These sorts of collaborations can be recorded and stored as reference materials for future jobs, as well as video evidence for using in disputes or investigations on safety or expensive equipment. Likewise cameras can immediately identify the parts and devices the technician is looking at, read serial numbers and bar codes, and automatically detect completion of steps.

[easy-tweet tweet=”Ruggedised wearable devices in the form of smart watches, smart helmets, etc. can be designed to alert for safety hazards” via=”no” usehashtags=”no”]

Take the Oil and Gas industry, for example. With a decline in production rates, increasing production costs, a retiring skilled workforce leaving a void of knowledge and expertise among younger colleagues, not to mention a whole host of remote and dangerous working environments makes it an ideal candidate for wearable tech. Ruggedised, and even explosion-proof wearable devices in the form of smart watches, smart helmets, smart glasses, as well as sensors embedded into clothing can be designed to detect such things as radiation and chemicals, monitor a worker’s stress levels and alert them to safety hazards, suggestions and procedures – all of which can dramatically improve health and safety. And with augmented reality, access to a wide range of data, virtual over the shoulder coaching, and collaboration in a hands-free environment, wearables can not only enable greater efficiency, faster decision making, and reduced down time, but also lower costs by significantly improving worker efficiency. If we look back at the history of technology adoption, it is the proof of a hard ROI number and strong bottom line cost savings which typically catapult adoption into the enterprise.

Wearable technology has the ability to empower field service workers to work seamlessly onsite with access to all of the data, insight and information they require. The equipment that technicians are being tasked with servicing is becoming increasingly complex, and companies are diversifying to repair and maintain a variety of products – including third party products, requiring a wider range of skills. In this context, wearables can not only ease the burden of servicing an increasingly diverse product base, but also enable access to faster, more dynamic intelligence that static manuals simply cannot provide.

A recent IDC report estimates the global market for wearables will “swell to 111.9 million units in 2018, resulting in a CAGR of 78.4%”. We are still some way off from seeing wearables used to their full potential, but the field service industry will be both one of the biggest trail blazers and one of the biggest beneficiaries in this market. With Gartner predicting that companies in field service could increase their profits by up to $1 billion annually through greater efficiency and cost effectiveness, it’s not a question of if, but rather of when. 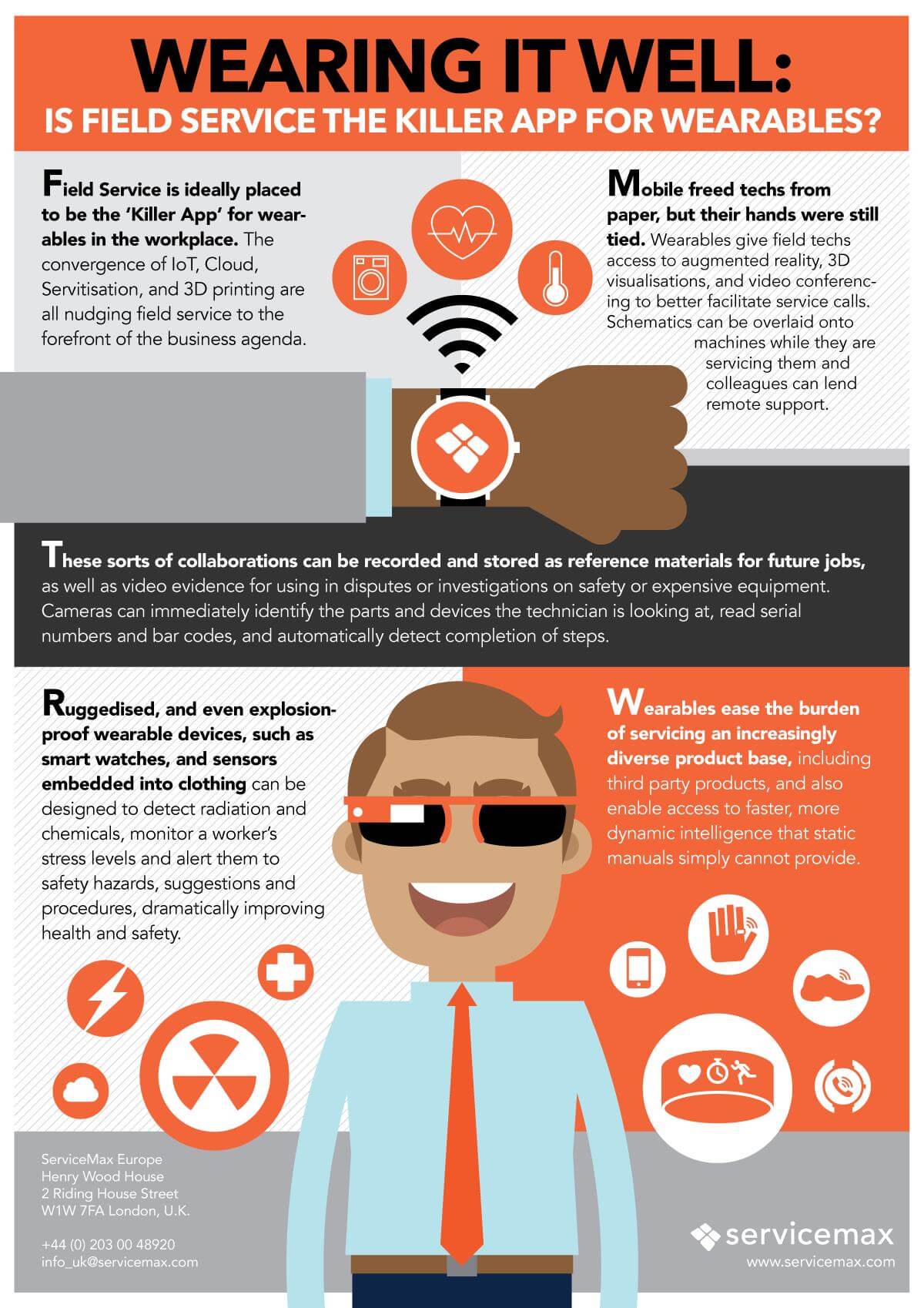 Future proofing your business – Start working in the present

Expansion: up, down, left, right, forward or back – which way...

Ways to Improve the Security of Your Smart Home