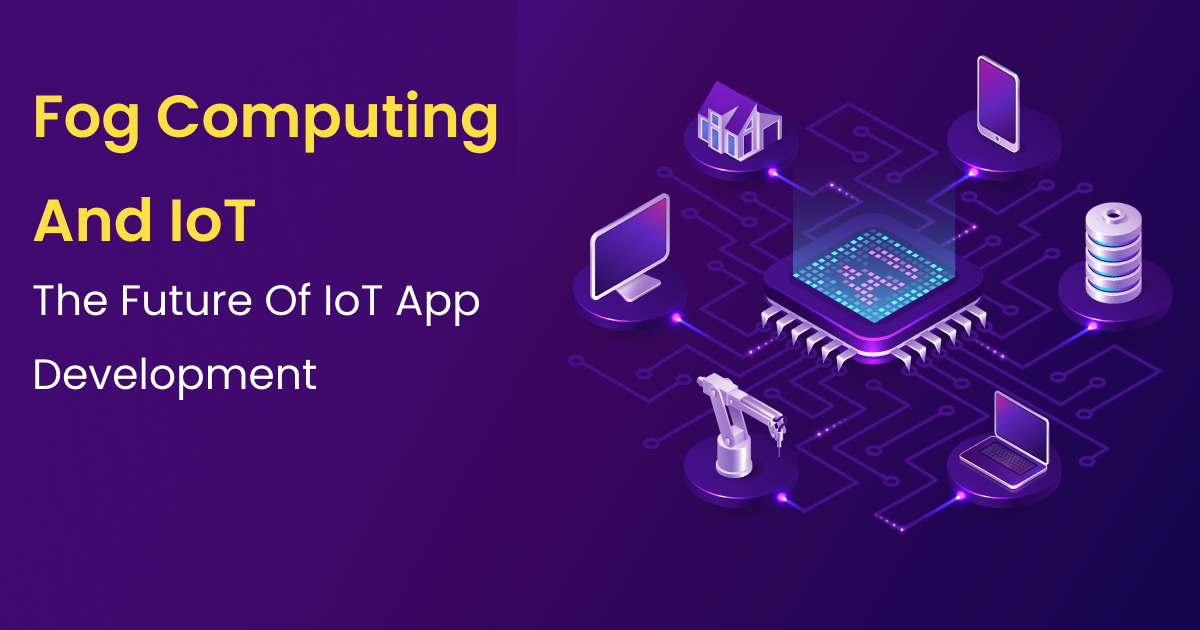 In simple words, fog computing stands for decentralised computing infrastructure where the computing resources (e.g., applications) are placed between the cloud and data source. The term “fog” actually refers to a cloud’s periphery or edge.

Fog computing pushes power of the cloud closer to where data is created and engaged with. Meaning, more users can stay connected to the Internet at the same time. It offers the same network and services as the cloud, but with added security and compliance.

According to IDC, 45% of the data worldwide will move closer to the network edge by 2025, and 10% of the data will be produced by edge devices such as phones, smart-watches, connected vehicles, and so on. Fog computing is believed to be the only technology that will stand the test of time and even beat Artificial Intelligence, IoT app development, and 5G in the next five years.

It is a highly virtualized platform that offers storage, compute, and networking services between the traditional cloud computing data centers and end devices. Fog computing can be characterized by low latency, location awareness, edge location, interoperability, real-time interaction between data and cloud, and support for online interplay with the cloud.

Although a lot has been written and researched about fog computing, it is not easy to say how different fog players will align in the future. However, based on the nature of significant services and applications, it is safe to conclude that:

Some known players in fog computing include open source cloud infrastructure providers such as Apache CloudStack7, OpenStack6, and OpenNebula8.

Do not be surprised when we tell you there are almost 31 billion IoT devices in use as of today. No wonder we produce 2.5 quintillion bytes of data per day. It is obvious we need an alternative to the traditional method of handling data. That is where fog computing enters the picture.

When an application or a device collects enormous volumes of information, efficient data storage becomes a challenge, not to forget, costly, and complicated. Heavy data puts a load on the network bandwidth. Setting up large data centers to store and organize this data is expensive!

Data centers are not developed to handle the growing demands of smart city apps. As more and more people started using more IoT devices, more data would be transmitted and accessed. Fog computing can help such ill-equipped smart grids to deliver the actual value of IoT app development.

The term “utilities” includes applications for hospitals, transportation, law enforcement, and so that need the latest technology to deliver data to support their operations. For instance, information about carbon emissions, potholes on the road, and water leakages can be used to update billing information, save lives, and improve operations.

IoT and end-users are becoming increasingly powerful. A large amount of data is now being processed directly on the cloud. Adding to that, here are six benefits that fog computing can deliver to the IoT app development process: 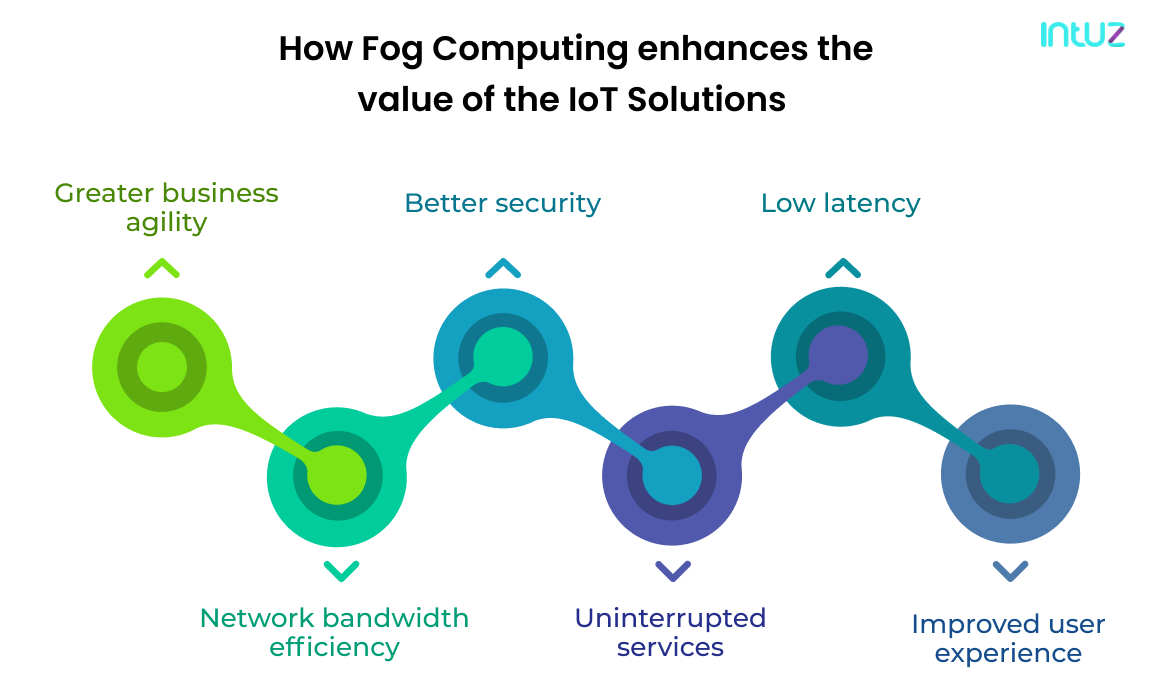 With the right tools, you can build fog applications and deploy them as needed. Such applications program the device to operate in the way a user wants.

Fog computing acts as a proxy for resource-constrained devices and updates their software and security credentials. It deploys fog nodes using the same policy, procedures, and controls used in other parts of the IT environment.

When data is processed by a large number of nodes in a complicated distributed system, it is easier to monitor nearby connected devices’ security status.

Have you noticed how quickly Alexa does something on being asked? That is because of low latency thanks to fog computing. Since the “fog” is geographically closer to all users (and devices), it can provide instant responses. This technology is ideal for performing all time-sensitive actions.

Fog computing enables fast and efficient data processing based on application demands, computing resources, and available networking. Pieces of information are combined at different points instead of just sending them to one data via one channel.

This reduces the volumes of data required to be transferred to the cloud, thus saving network bandwidth and considerably reducing costs.

Fog computing can run on its own and ensure uninterrupted services even when the network connectivity to the cloud hampers. Moreover, due to multiple interconnected channels, loss of connection is almost impossible.

Although fog and cloud computing may seem similar from the outside, they form different layers of the industrial Internet of Things solutions. Here are a few parameters on which both technologies differ:

Fog bridges the gap between the hardware and data centers and hence is closer to end-users. Without the fog layer, the cloud interacts directly with the devices, making it so time-consuming.

Cloud computing capabilities are higher as compared to fog.

Fog consists of millions of small nodes, whereas the cloud has only a few large-server nodes.

Fog computing uses various security measures and protocols, making the risk of cyber threats and data leakage much lower. Plus, it has a distributed architecture. However, cloud computing is not possible without an internet connection. Since it is also centralized, the risk of any cyber threats is higher.

Fog computing vs. edge computing: are they the same?

This is a tricky question. But to keep things simple—yes, fog computing and edge computing are essentially the same things. Both technologies leverage the computing capabilities to push intelligence down the network architecture’s local area network level.

This prevents the computation tasks from being carried out in the cloud and thus saves time, resources, and money. Besides, both fog and edge computing can help businesses reduce their reliance on cloud-based platforms for data analysis, which leads to latency issues and reduces the time taken to make data-driven decisions.

One of the significant differences is, perhaps, in the data processing. In fog, data is compressed with a fog node. Edge computing processes the data on the device or sensor without being transferred to any other infrastructure.

Nonetheless, both technologies save time and resources when it comes to maintaining operations—with proper data collection and analysis in real-time. Imagine getting near-real-time analytics that is beneficial to optimizing performance and increasing uptime. That is what both fog and edge computing make possible.

Real-time use cases of fog computing and IoT app development

There are many areas where fog computing makes a mark for being robust, dynamic, and advanced technology. This section discusses four such real-time use cases:

Data transmission in video streaming apps is well-organized at the fog platform. This is because of the elasticity and capacity of fog networking combined with real-time data analysis. Plus, fog enhances communication at a virtual desktop structured system, thus enabling real-time video data analytics for surveillance cameras.

Smart healthcare decisions in the future would be incomplete, with robust and real-time health observations and monitoring. However, this can be made possible with the deployment of fog computing frameworks that enable data transmission in real-time.

Another important use case is amplifying the “U-Fall” application, which involuntarily detects the extensive fall in the case of mild strokes.

Just like the cloud, fog computing brings the power closer to the gamers. For instance, SEGA’s fog gaming system uses local game centers and arcades as a server farm to ensure low latency.

So, instead of streaming from the cloud, gamers would harness CPUs’ power of the local arcade equipment. The distributed devices use fog nodes for a better quality of experience by ensuring smooth multiplayer online gaming.

Imagine there is a smart traffic light system. Its node interacts locally with many sensors to detect bikers and pedestrians’ presence and measure the speed and distance of vehicles. Based on the information, it sends warning signals to cars through the green light.

In another example, since it already monitors video surveillance cameras, it is easy to spot an ambulance through the alert alarm and its emergency light. Traffic lights can be changed to permit them from passing through the traffic.

Fog computing is a companion to the cloud and handles large volumes of data generated daily from the Internet of things solution. As mentioned earlier, processing data closer to the source of information solves the challenges of exploding data volume, velocity, and variety. It gives businesses better control over their data.

Fog computing also accelerates awareness about and response to the events. It eliminates the need to go to the cloud for any analysis. That means no more costly network bandwidth problem in the Internet of Things solutions and no need to offload volumes of data onto the core network.

Fog computing also aims at protecting sensitive IoT data as it analyses it within the company’s firewalls. Ultimately, it leads to increased business agility, improved security, and higher quality of service levels.

Ensure your Office 365 migration runs smoothly, and keeps your users...

Fashion from the Neural System – The Giant Health Event 17...

Beyond The Call Of Duty: Drones Are A Major Industrial Multitool