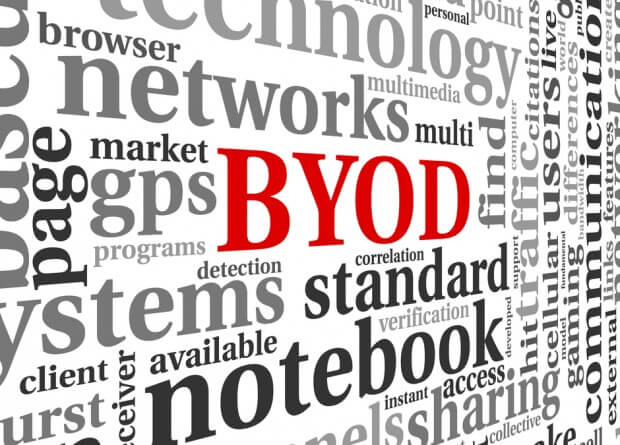 Bring your own device (BYOD) is far from a cutting edge term, in fact, it’s been on the table for a while now and it all started with the boss when they bought their nice new shiny toy into work that they got for Christmas and announced this is what they will use from this day forward.

The gospel according to BYOD had been born.

It became the universally accepted hall pass for ‘Let’s sidestep the policies we once insisted were important. Never mind that standardisation malarkey, details, details. Let’s not worry about any of that, we have new shiny toys. That’s all that matters’.

Of course, it’s not just the boss any longer; we’re all guilty. As the concept of BYOD began to grow a set of legs, the era of the smartphone and the tablet emerged and eye contact slowly became a thing of the past.

In May 2013, Gartner published an analyst view that, by 2017, up to 60% of businesses will have adopted a BYOD policy of some description. BYOD as a strategy may well prove to be an answer to many questions being posed to businesses the world over but do we now consider it a safe option?

In this white paper, we examine todays rationale for BYOD and try to answer the question; Is BYOD really a viable option and has that big bad wolf been tamed and transformed into an ‘App shaped pocket sized pampered pooch’? It’s a very good question.

Contrary to the hype, the speed of digital surprised everybody

There can be no argument that the digital world is rapidly changing at unprecedented speed. For many CIO’s it really is a question of adapt or be left behind by the business they aim to support. We no longer care what the badge on the software says or who the vendor is in most cases. Many business users have grown up knowing nothing else but digital technology and all that it offers. They see the IT market as a supermarket; its shelves full of packaged services and products that they can choose for themselves. After years of exalting the virtues technology could potentially deliver, the hype has become the reality.

An IT department is increasingly being perceived as an organisation that introduces unnecessary delay. Obstacles previously regarded, mainly by a protective CIO, as barriers to technology adoption, are either being brushed aside or aggressively challenged by an ever-savvy user community. The fact is that the digital children are just as, if not more, familiar with the new technologies than many of their IT counterparts.

You’re more likely to hear ‘I’m going to anyway’, rather than ‘May I?’ because that way, the job gets done but at what cost?

Where in The Cloud is My Data?

Which Industries Will Benefit Most From IIoT 2019?